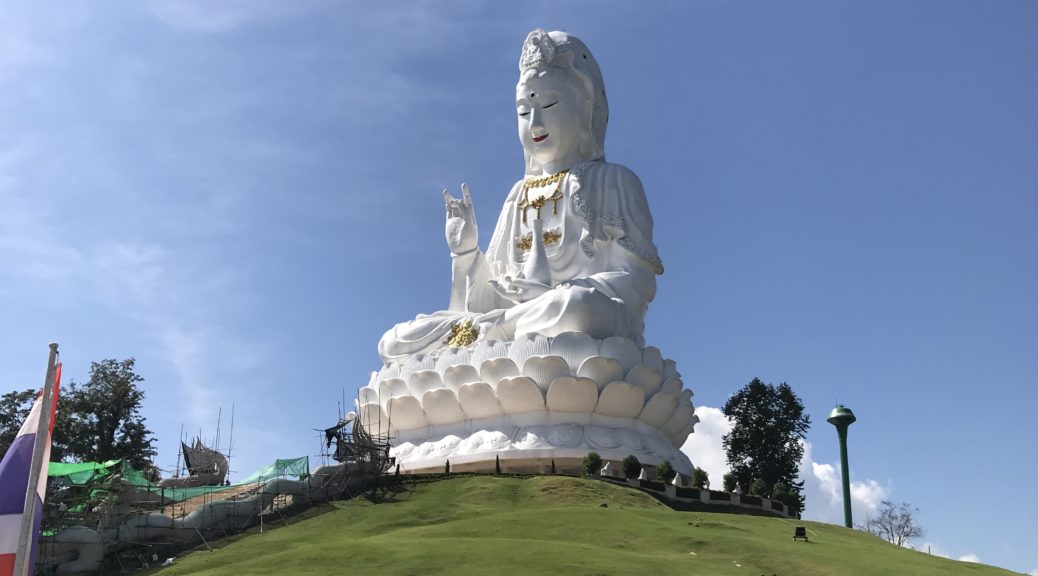 This temple’s a little off the beaten path, so it’s not as common a tourist destination. However, it’s worth going to see both for the temple itself and the beautiful drive through scenic Thailand.

It’s located North East of Chiang Rai city centre, around a half hour drive. There’s a few things to see within the temple complex – the temple itself, a white temple that’s currently under construction and the most enormous Buddha statue I’ve ever seen. Seriously, you can see it most of the way from Chiang Rai – it’s that huge!

The temple itself is nice to see, although if you’re pushed for time then the White Temple and Blue Temple would be my preferred options. The 9 tier Chinese pagoda is interesting – definitely different from the other temples we’ve seen.

Inside it feels more like an oasis than some of the other temples – calm and serene. There’s a lot of space inside, which allows you to look up into the tiered roof. There are balconies around each tier, getting increasingly smaller as you get higher.

On the ground floor, you can walk around the edge, sit, have a break from the heat and have a glass of water.

The giant Buddha statue is on a hill next to the 9 tier temple. You can easily park in the carpark and walk to both. The Buddha sits on a colonnade. We didn’t walk through it though, both because we didn’t want to walk up the hill in the scorching Thai heat and because we didn’t fancy having that much rock sitting on top of us!

There’s also a new temple being built between the Wat Huai Pla Kung and the Buddha statue. It was still under construction when I visited, but you could walk up and look inside. It will be impressive once it’s finished with white steps, dragons and columns , leading to a white Buddha statue.

Other things to see and do in Chiang Rai