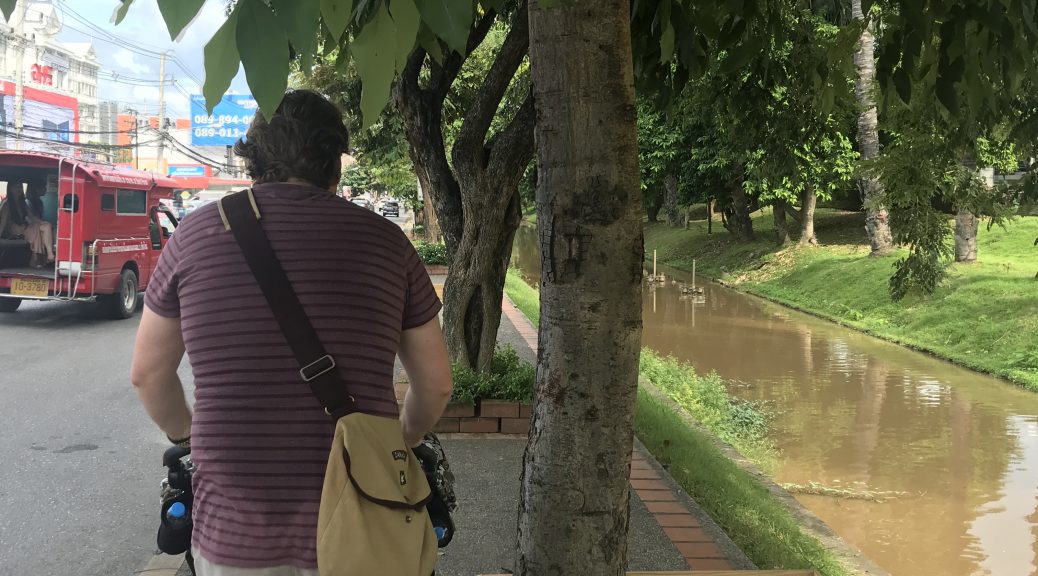 People love Chiang Mai. It’s a bit like Canada – one of those places you never seem to hear a bad word about.

In 2012, when we came for our honeymoon, we would have been one of those people. But now in 2017? Maybe it’s the kids. Maybe it’s 5 extra years of intense development. Maybe it’s the area we’re staying in (Nimman, just outside the old town).

Whatever it is, the charm of Chiang Mai has gone and been replaced with vehicles and bad pavements.

I remember walking the streets as a newlywed and thinking how lovely, peaceful and charming Chiang Mai was.

Now, I try and walk the streets with a double buggy and when I’m not weaving around the traffic because the pavement’s disappeared I’m worrying about whether my baby’s fallen asleep because of jet lag or carbon monoxide poisoning.

Today we decided to explore. We packed up the kids into the double buggy and went to the MAYA shopping centre.

Air conditioned, clean, a vegetarian food stand in the basement. So far so good, but who wants to spend their holiday in a shopping centre? So we decided to walk to the old town.

We didn’t want to walk down the busy main road with no pavements, so we tried the side streets. Without fail they all stopped at dead ends or sketchy looking compounds. Eventually we took a shortcut through a building site and a car park and made it to the ring road. We crossed over and started to walk around to try and find a way into the centre.

Mistake no #2: Attempting to walk on the pavement with a double buggy

Apparently the pavement around the Old town isn’t made for walking. Because really, who walks on pavements?

It starts off innocently enough, luring you to try it. Sure there’s a few trees, but you can mostly get round them, lifting the side of the pushchair occasionally. But after a few of these you realise it’s getting harder and harder to get around as the trees (and the wooden boxes around the base) take up more and more of the pavement. Before you know it you’re stuck on the side of a busy road with barricades either side of you. Do you go back and lift the pushchair back over the tree bases you thought you’d left behind? Or do you attempt to cross said busy road to use the still rubbish, but slightly better pavement on the other side.

Which brings me to my next mistake:

Mistake no #3: Assuming that zebra crossings are for pedestrians to cross at

Zebra crossings, the almost universal sign for ‘stop for pedestrians’. I’m not entirely sure what they’re for here in Chiang Mai. Target practice, perhaps? You can wait and wait at one, but until you actually walk out in front of traffic it won’t even slow down. Even when you’re on it, the cars and bikes seem to assess whether they can get around you, and if they can, they do.

Mistake no. #4: Getting in a red bus (songthaew)

Once we got to old town, walking around was bearable. The pavements weren’t good, but it wasn’t too much trouble to get around. By the time we’d walked from one side to the other, though, we were tired decided to take transit home.

In Chiang Mai you have 3 options for transit:

We took a songthaew as we couldn’t find a taxi and didn’t think our pushchair would fit into a Tuk Tuk. At the start it was fine. Jack was excited by the new mode of public transport. There was a nice breeze as it drove along. That was, until we got to the road leading up to the MAYA shopping centre.

The lights at this intersection last for around 3 minutes each, which is great for getting traffic through, but awful when you’re waiting. If your light is red, it’s going to be red for over 10 minutes. Add a huge queue of cars spewing out pollutants and being in an open, hot metal cage and it becomes a pretty awful experience. After we’d been sitting at the second red light for a very very long time we were all starting to get a bit frantic. Jack was crying, rolling around the seats, hitting things. Cade was tired and whingy too. Karl and I were hot and concerned about our kids sitting in all that pollution.

After a few minutes of wondering whether the lights were literally broken, I looked out the window and for once the pavement looked good. So I just said screw it, we’re getting off. We unloaded kids, double buggy and shopping and paid the driver. The lights, of course, immediately turned green and our bus left.

This turned out to be:

Mistake no. #5: Getting off the red bus

I looked down the road and realised that just beyond where I could see from the bus, the pavement had been torn up and was instead a giant hole with diggers and a fence around it. I should have known.

So we then found ourselves on basically a 2 lane dual carriageway, with a foot high hedge barrier in the middle. No pavement to get where we needed to go, no pedestrian crossing as far as we could see and 2 tired, hot, cranky children.

There were no cars going the other direction, so we decided that we would be able to cross to the other side relatively safely by going when our light was red. So we wove through the traffic, hopped the hedge (a bit laboriously with a 15 kilo pushchair with 2 kids and shopping in it) and crossed to the other side.

Thankfully, there were pavements from then on, so we made it to the oasis of MAYA shopping centre and its air conditioned halls.