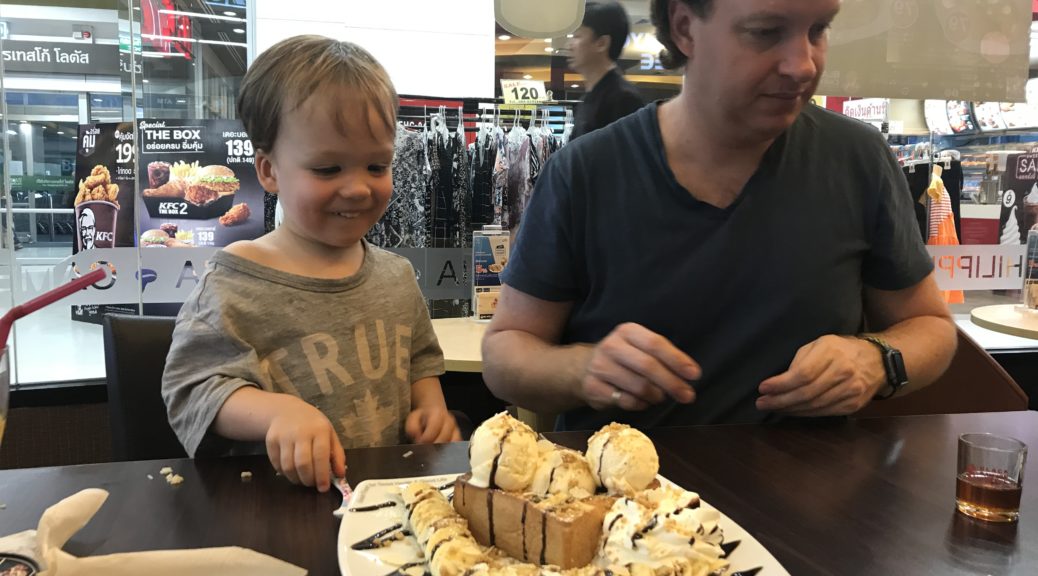 We seem to be doing a lot of lunches out this week! This one wasn’t planned, but turned out pretty well – the Black Canyon Coffee shop near the Tesco Lotus (San Sai district, Chiang Mai).

It started as a bit of bad parenting on our parts (!). We decided to go out at snack time. I promised Jack that I’d bring some rice cakes for him in the car, and then promptly forgot in all the hustle and bustle of getting out the door. (Incidentally, if you’ve never watched Michael McIntyre’s  ‘People with no kids don’t know’ then I recommend you do https://www.youtube.com/watch?v=uFQfylQ2Jgg)

We were in a store and Jack was being awful. He was hitting me, running away, pulling at my clothes, doing the exact opposite of what I told him to. After a while of this I remembered my promise of rice cakes. I asked if he was hungry. He immediately stopped being a little butt and looked up at me with huge brown eyes: ‘yes, I’m very hungry’. Oh dear.

We left immediately and went to the nearest place to get food – the Tesco Lotus.

I was dubious, but my coffee loving other half dragged me into the Black Canyon Coffee. When I saw the Matcha green tea advert on the wall and the vegan Pad Thai in the menu I was sold.

We got pork and rice for Jack, along with an orange juice (which can be hard to find in Thailand). In my book Black Canyon Coffee was already doing well by having everything we wanted to eat and drink.

Then the food came and I asked for a small spoon for Jack. The guy came back with not just a plain old metal teaspoon. Oh, no, not in child loving Thailand. He brought back a super-awesome Winnie the Pooh children’s food tray along with matching spoon and fork. Suddenly my grumpy, hungry 2 year old was a deliriously  happy 2 year old. Once karl had transferred his meal to the tray (every compartment had to be filled with rice and pork, even the small soy sauce section) he happily dug in with his Tigger spoon.

After we’d ordered our food another couple came in and sat near us. The staff then brought over 2 of the most enormous desserts I have ever seen in my life. Karl was not a happy bunny. I soothed him with the affirmation that, yes, we could buy one of those for dessert and he settled back down to his omelette.

Jack devoured his rice and pork, but apparently there’s always room for whipped cream and bananas.

After Jack had had his fill he proceeded to run around the coffee shop in a mad sugar fuelled frenzy. Far from being disapproving, though, the staff actually started playing with him while Karl and I finished off the rest of the dessert!

By the time we left Jack had made friends with every single staff member in the shop. One was doing high fives with him, another was playing peekaboo through the shop window, another was doing the customary Thai ‘dir-ay’ greeting with him.

Other articles about eating and drinking in Thailand