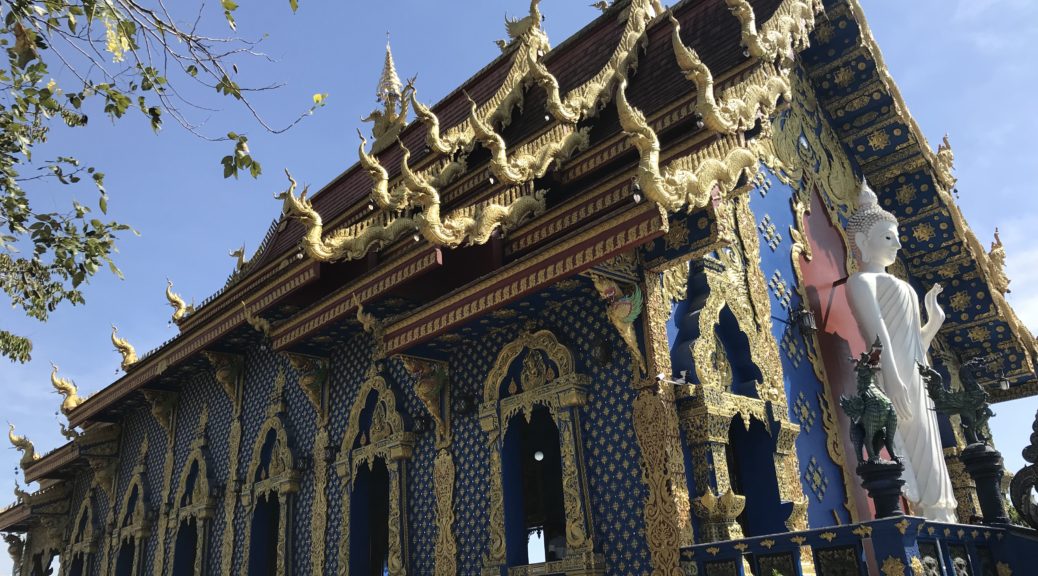 The Blue Temple Chiang Rai is beautiful. It’s also quick and easy to visit – you can drive straight up to the temple, pop in and pop out. I’d definitely recommend adding it to your itinerary.

This temple was built by the villagers. Construction began in 2005 and was completed in 2016. Prior to this, there had been a ruin of an older temple on the site for 80-100 years.

The Blue Temple is named after the village it’s found in – Rong Sear Tean. ‘Sear Tean’ literally means ‘dancing tiger’. The story goes that there used to be tigers than would jump over the river and this is how the village got it’s name.

The entrance to the temple complex is pretty impressive. You pass between two giant, blue statues, decorated in the same style as the temple.

Once inside it’s a little hectic to find a car parking space – people and cars are everywhere. This is partly due to the temple and partly due to the gorgeous fountain in the centre of the car park. It’s designed in the style of the temple interior – a white statue surrounded by detailed blue sculpture and art. I was definitely guilty of being one of those pedestrians in the way when I went back to photograph it 😉

The temple itself is a lovely piece of architecture. It has many standard ‘temple’ elements – tiered roof, Chinese dragons flanking the steps – it’s the craftsmanship and detail that makes this temple spectacular. The dragons outside the temple are of particular note. There are multiple dragons intertwining around the steps. Everything’s painted in metallic paints so it shimmers and glitters in the sun. Our toddler loves all dragons, but he was completely mesmerised by these ones.

Once we managed to tear ourselves away from the outside we entered the temple itself.  There’s a huge white Buddha in the centre and artwork covering every inch of wall. Again, the detail of the paintings was really lovely. In contrast, the Buddha itself was pure white – it definitely stood out against the surrounding detail.

I can see why this is ranked one of the top things to do in Chiang Rai by Trip Advisor. It’s beautiful inside and out, free to enter and extremely quick and easy to visit. What’s not to love?

The blue temple is a few km outside of the centre of Chiang Rai in Rong Sear Tean (Rimkok district). There’s no public transport, but plenty of Tuk Tuks and taxis. You can also get to this temple on one of the Chiang Rai temple tours.