We decided last minute to go to the Chiang Rai balloon festival, held in the Singha park.

Getting to the balloon festival

The festival started at 4pm. We arrived early and there wasn’t much open, which we should’ve known – nothing happens in Thailand during the midday hours, it’s just too hot.

Its a pretty common occurrence to see Thai people putting an umbrella down for shade. They were selling giant yellow Singha unbrella/parasols. We brought one, and tried to get Jack to nap on the grass. We failed, as he’s 2 and excited. But it was still a pleasant way to spend a few hours!

We were roused from our stupour by the blaring music and went to explore the festival. The first row was arts and crafts. It wasn’t bad a huge selection but what they did have was good quality. There were paintings, sculpture, fabrics, bags, jewellery – the usual stuff.

Inside the festival the entire area around the stage was lined with food stalls. And I’m not exaggerating here – literally the entire outside was for food. I think this is partly cultural – Thai people love their food. It wasn’t too expensive either (around £1 per dish), which was a nice change from the £4 hotdogs at UK festivals! 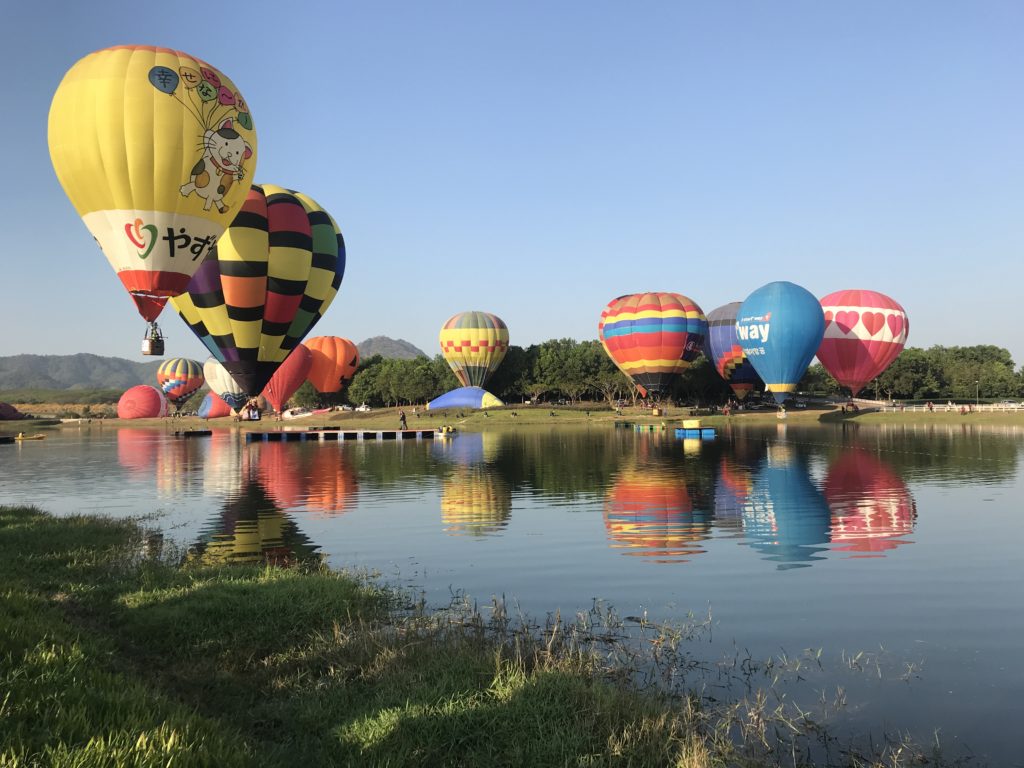 Until you’ve seen a hot air balloon up close it’s difficult to appreciate how big and impressive these things are.

We were sitting in front of the stage, and suddenly it looks like a giant, multicoloured Sun is rising right in front of you!We made our way towards the lake and by the time we got there there must’ve been 20 balloons up. 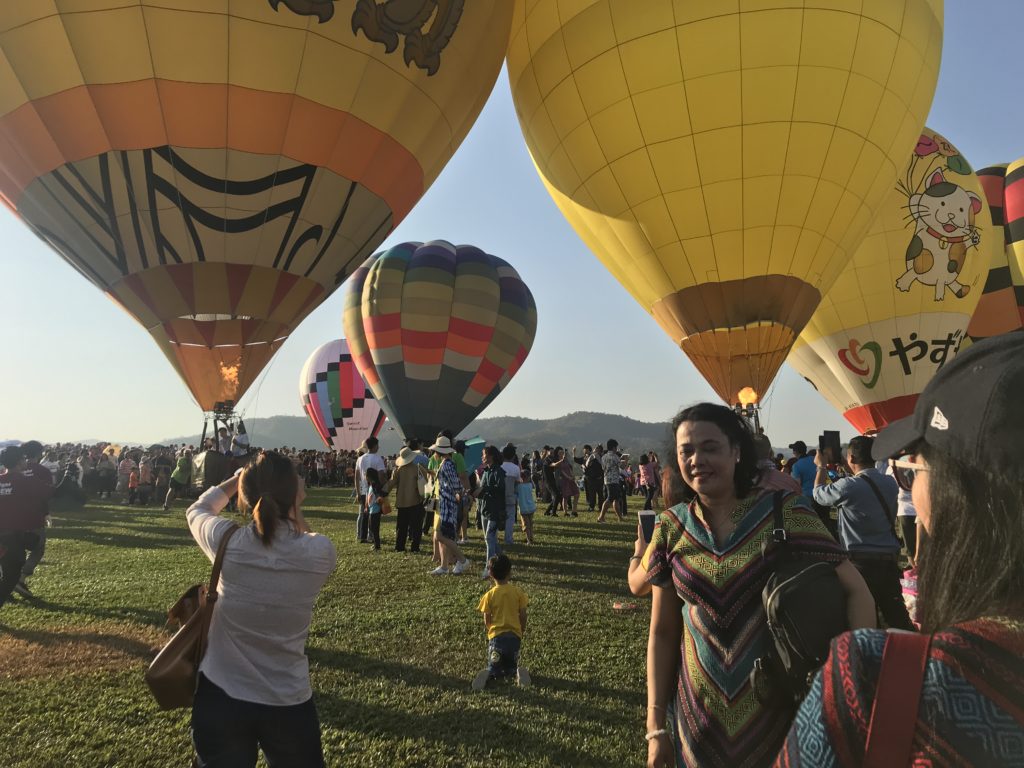 Down by the lake it was absolute chaos! The balloons flew across the lake, landed and then were half flown half dragged through the crowds back to the beginning again. You definitely had to have your wits about you to avoid being mowed down by rogue balloons.

I saw balloons crashing into each other, bashing into sound equipment, crash landing in the lake and more!

There was a constant Thai commentary throughout. At one point they switched to English and asked *someone* where they were from. When it turned out to be England there was a minute or so of the commentators saying ‘a cup of tea’ in actually quite competent English accents, before they switched back to Thai.

We mused in the irony of being in a country that grows tea and hearing ‘a cup of tea’ being the defining characteristic of an English person.

After a few more countries we’re done in a similar fashion, we eventually figured out that there were balloons from many different countries at the competition.

The competition involved flying along a defined path and throwing rings and balls onto targets. Then they had to get as close to the water as possible, before ascending and landing on the far side of the lake. We saw a lot of balloon baskets get dunked in the lake. We couldn’t figure out if it was intentional or not!

There were some pretty impressive balloons there. Of particular note were: 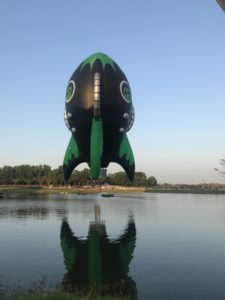 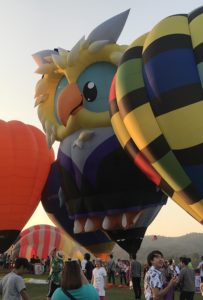 And this creepy giraffe balloon 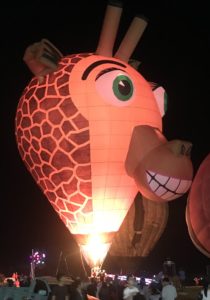 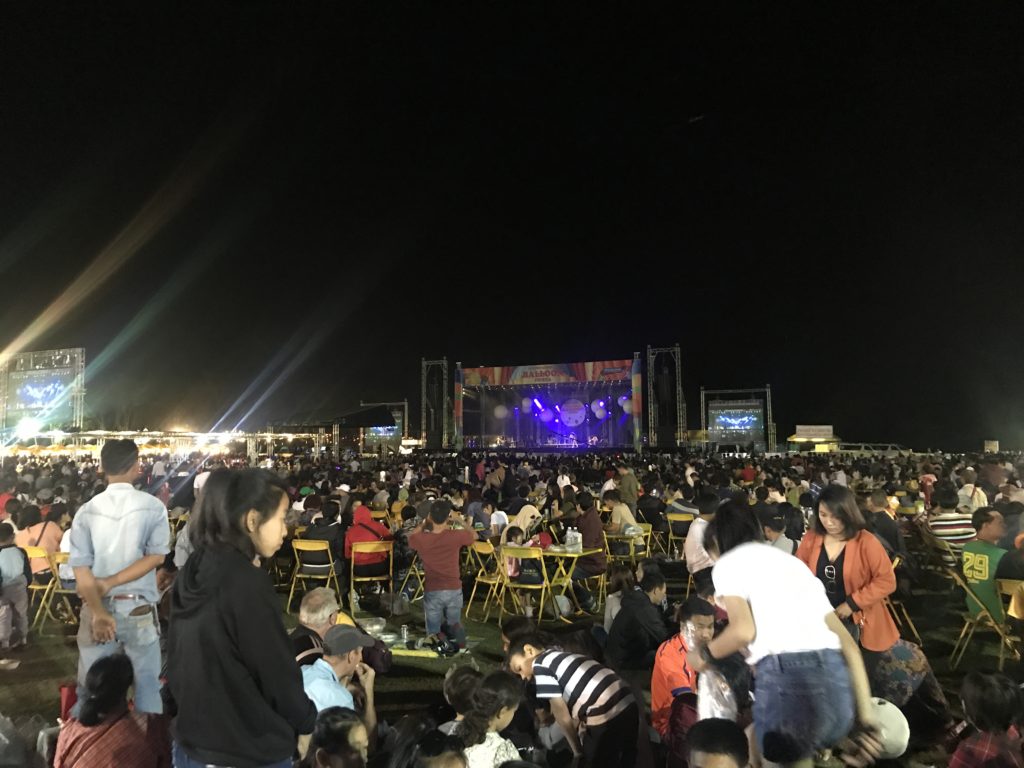 After the balloon competition there was a show by a Thai artist dressed in a black corset, with 5 or 6 white corseted, feathered backing dancers.

The dancing was like something you’d see on 90s TOTP. I also saw some very ‘Gangham style’ dance moves in there. It was quite entertaining – Jack had a good little boogie.

More entertainment opened in the evening in the form of hoopla over Singha water bottles, a gyroscope, bouncy castle, a kids play area inside a hot air balloon and my personal favourite – the Leo beer can rodeo. 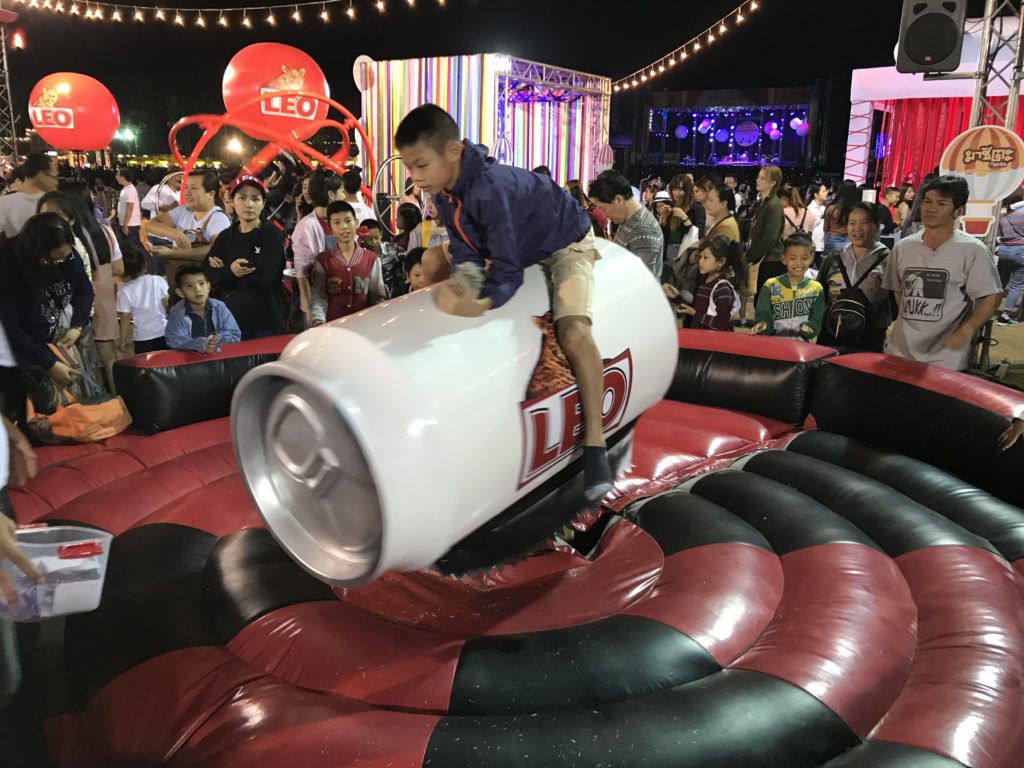 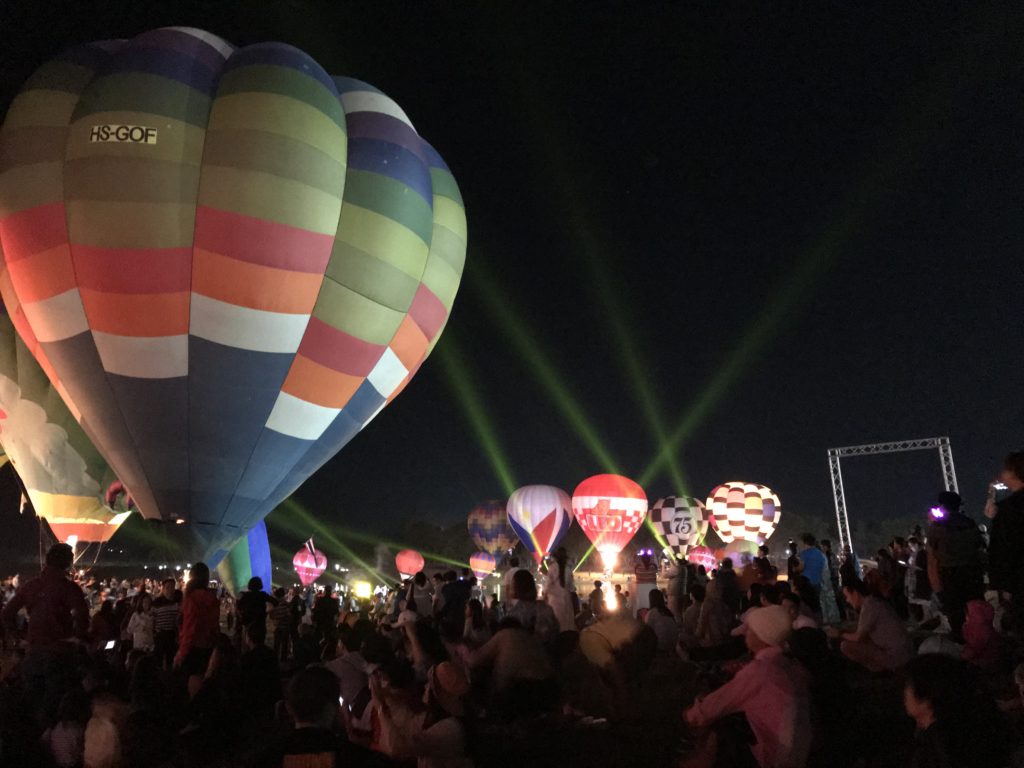 By this point it was dark and we were about to go when we saw all the balloons going up again.

After the finale we took a final Songthew back to our car and home to bed. Whatever we expected it wasn’t that! What an amazing festival – definitely once in a lifetime opportunity to experience something so cool!