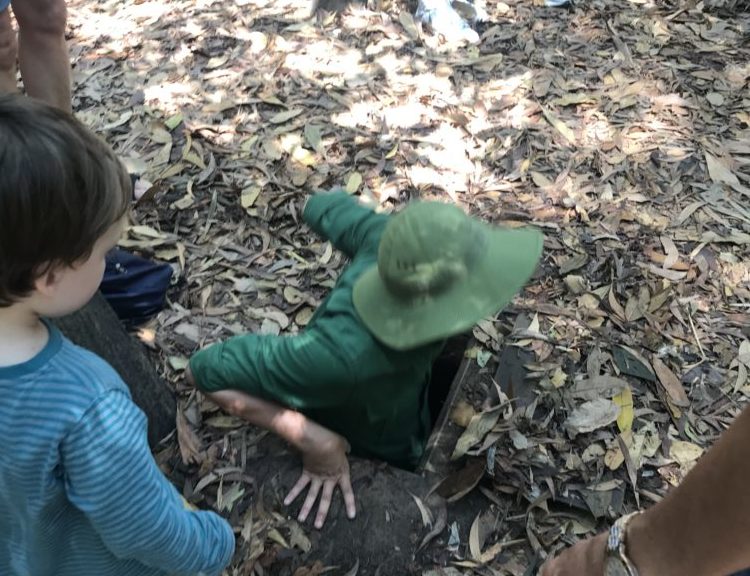 The Cu Chi tunnels are a network of underground tunnels that the Viet Cong used during the Vietnam war with America.

There are over 200,000km of underground tunnels and the Vietnamese lived in them for 19 years during the war.

We visited the Cu Chi tunnels with kids (1 and 3). Its definitely doable with little ones, although actually going into the tunnels with them may be tough. We even took our stroller – the paths were good enough to use it.

Arriving at the Cu Chi tunnels

This is a huge tourist attraction so there were loads of tour buses. It felt a little irreverent, having such a ‘this is a fun day out’ feel for a place that saw the slaughter of so many human beings. But I can’t fault the locals for that – they’re making a living and if it brings tourists then I guess that’s what they have to do. The gift shop did seem a little unnecessary though!

Intro video about the Vietnam War

The main area is a forest with thatched huts showing various aspects of the war.

We watched a 15 minute video in one. Audio was terrible, but it was still interesting seeing the wartime footage.

I felt a little awkward when they started telling us about the heroes of the war. The first was a guy who was very good at laying landmines. He was lauded as a hero for destroying American tanks. The second was a woman who was extremely good as shooting. She received the ‘American killer hero’ award. There were tonnes of Americans in the audience – I wonder what they thought of it!

I also found it a little hard to watch as all the footage was of people doing mundane things like baking bread and smiling at the camera – they all looked happy. This was cut with scenes of bombings and fighter planes. It felt like a sweetened version of what it must’ve been like. 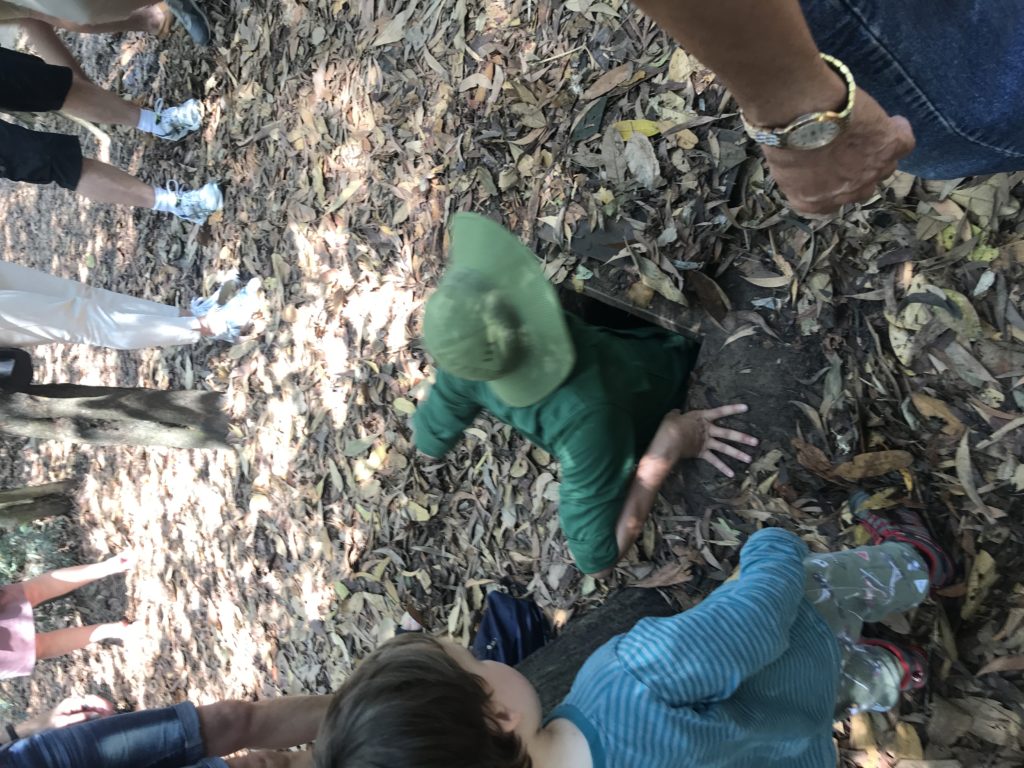 After the video we walked around a forest. At various points around the forest there’d be stops to look at.

Several of these were the entrances to the tunnels. They were tiny! I could just about get in – there’s no way that most Western men could!

You could go down into them and put the hatch down over your head.

We also saw the breathing holes – built to look like animal nests. Unfortunately as soon as the Americans figured out they were breathing holes they flooded them or poured chemicals down, killing everyone inside.

Americans posing on a tank 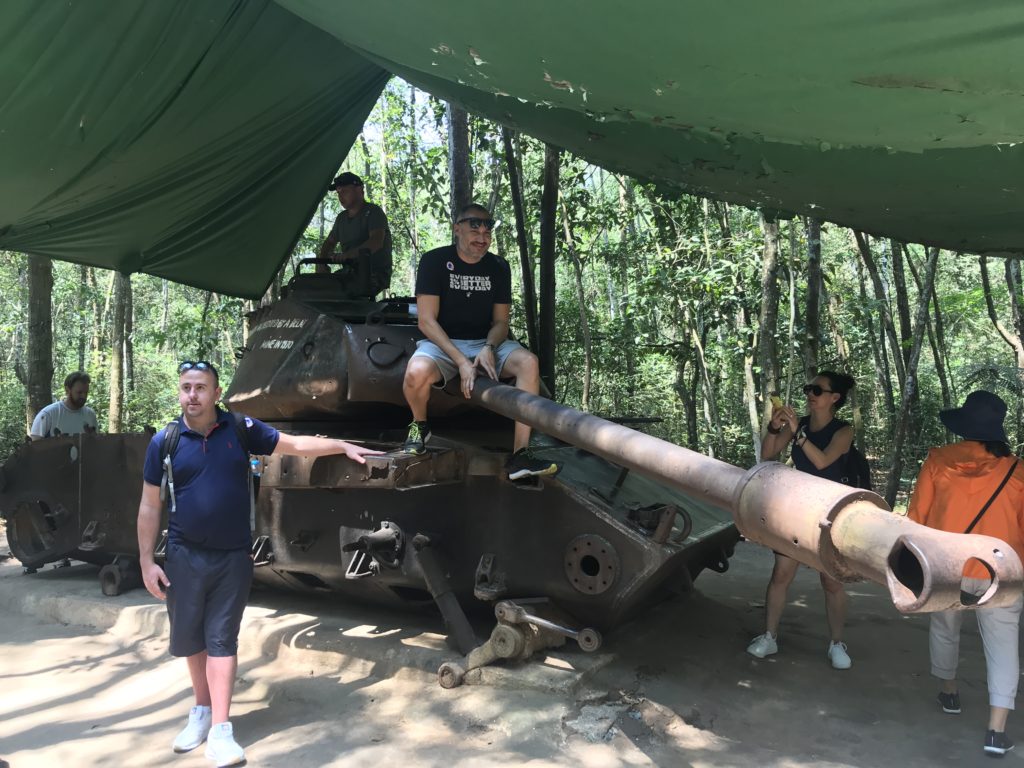 This was one of the more bizarre, tasteless things we’d seen. American tourists in Vietnam, posing on a death machine they’d brought into this country to kill its civilians. 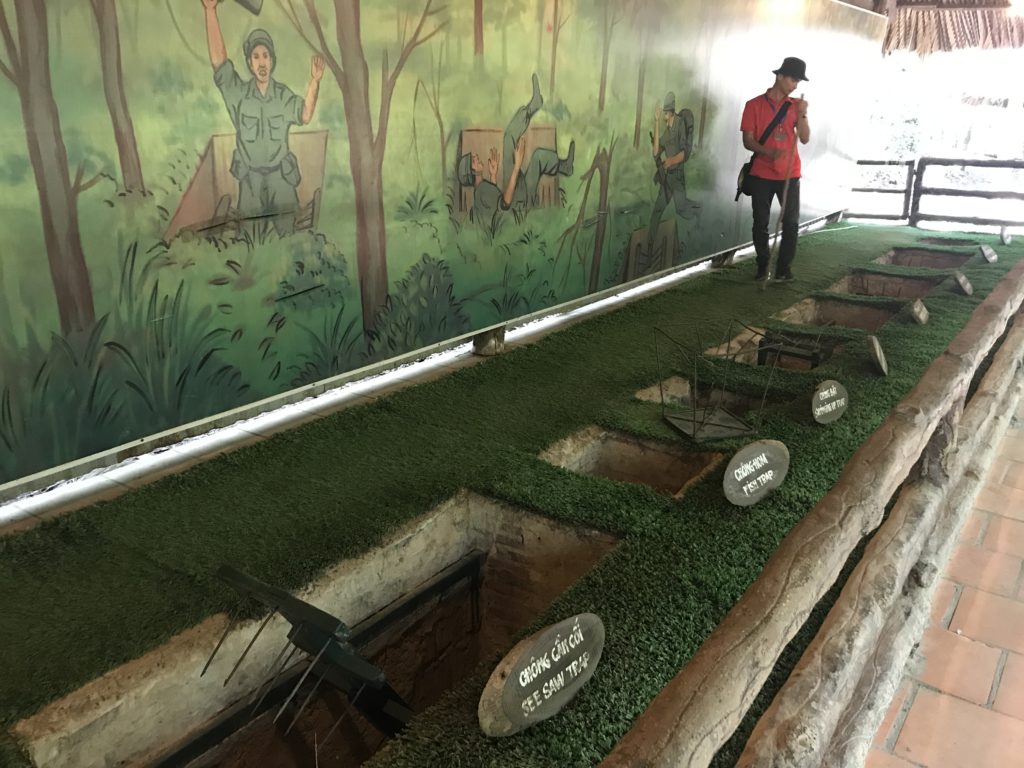 There were examples of bamboo spike pits, which were truly terrifying. Like something out of Tomb Raider. As if that wasn’t bad enough, apparently they were poisoned.

Then there was an exhibition about all the traps. It was intriguing, but also extremely horrifying.

It felt very real being there. The mentality seemed to be – ‘this is what happened, tourists want to know so we’ll show them’. No embarrassment, no soul searching, no gravitas.

They described the traps, right down to the names. Like this one, the ‘clipping armpit trap’. 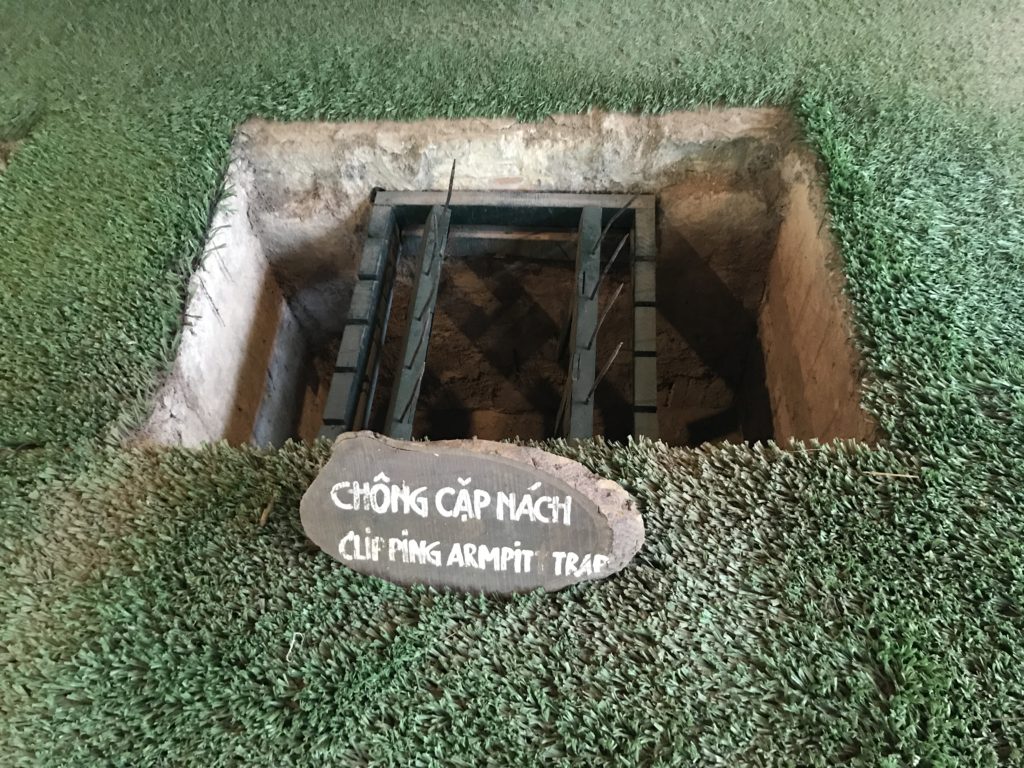 They also accompanied them with illustrations. 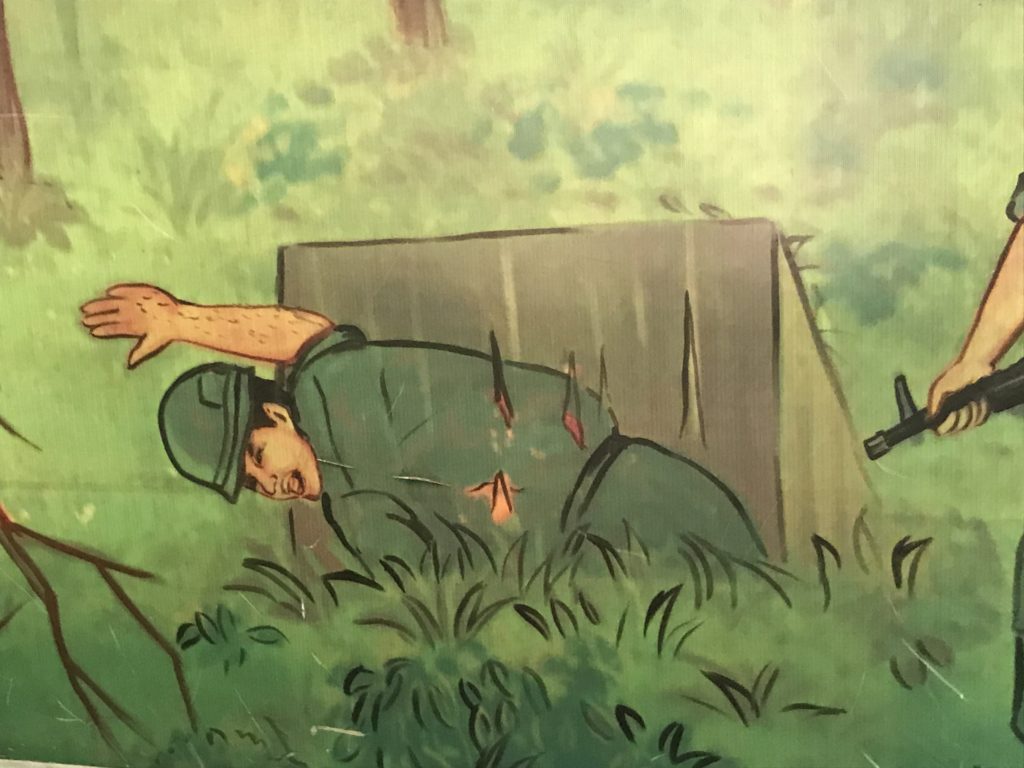 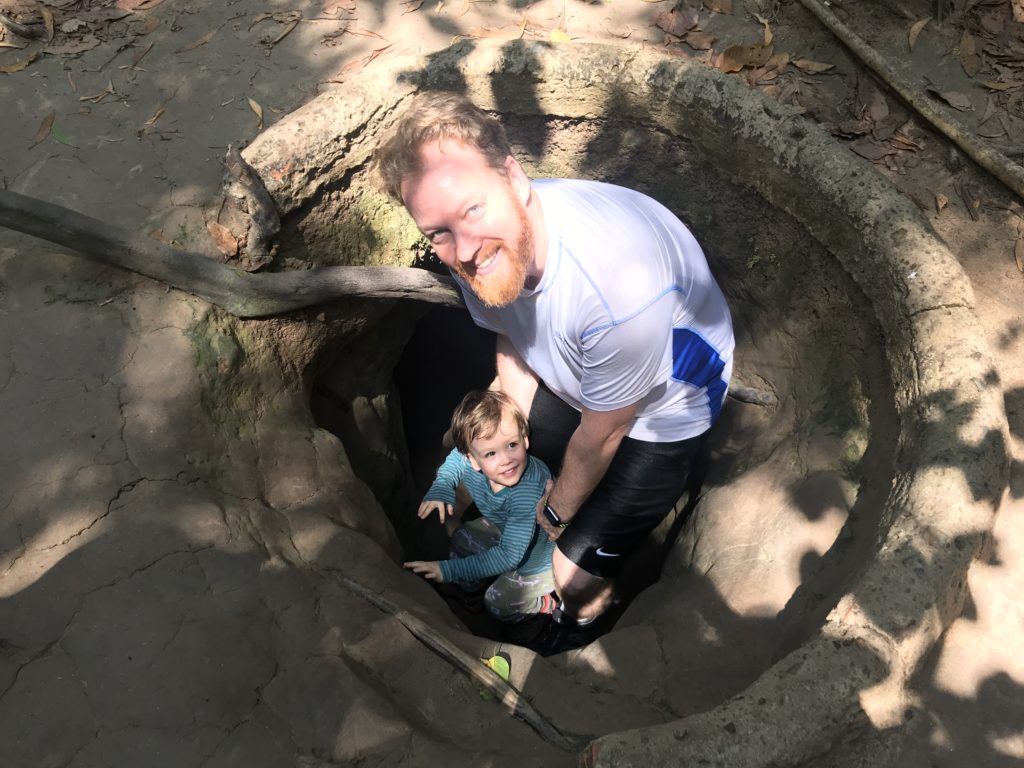 Sections of the tunnels were still open for tourists to go down (with a ‘guide’). I put this in inverted commas, because what he actually did was lead you down there and then scuttle away, leaving you in the darkness! Luckily both Karl and I had phones, so we immediately turned the flashlights on. It was still pretty awful – there were twists and turns and sections that branched off. Goodness knows where you’d end up if you took the wrong one. Shout for help and hope the guide returns, I guess.

Initially 3 of us went down – Karl first, then Jack, then me. It was ok with Jack – he was excited. Although I did make sure I kept very close to him. Wouldn’t want him running off down one of those tunnels I mentioned.

Our tour guide had said it was fine to bring him. Although it was fine, I wouldn’t have done it if isn’t known about all the bits branching off that weren’t cordoned off. I had visions of Jack running down one that freaked me out a bit.

There were 100m of tunnels to go through. Although you could choose to surface earlier. If you did the whole thing you’d be taken to the 3rd level – 10m underground and so low that you’d have to crawl on your belly through parts. The top section was around 1m high. Karl was told he wouldn’t fit in the lower section so he took Jack up. I went on a bit, but then had my experience of being left in the dark. Apparently the guide had done that to Karl too and he didn’t think to warn me :-/

I didn’t fancy going even further underground, after that so left at the next opportunity! 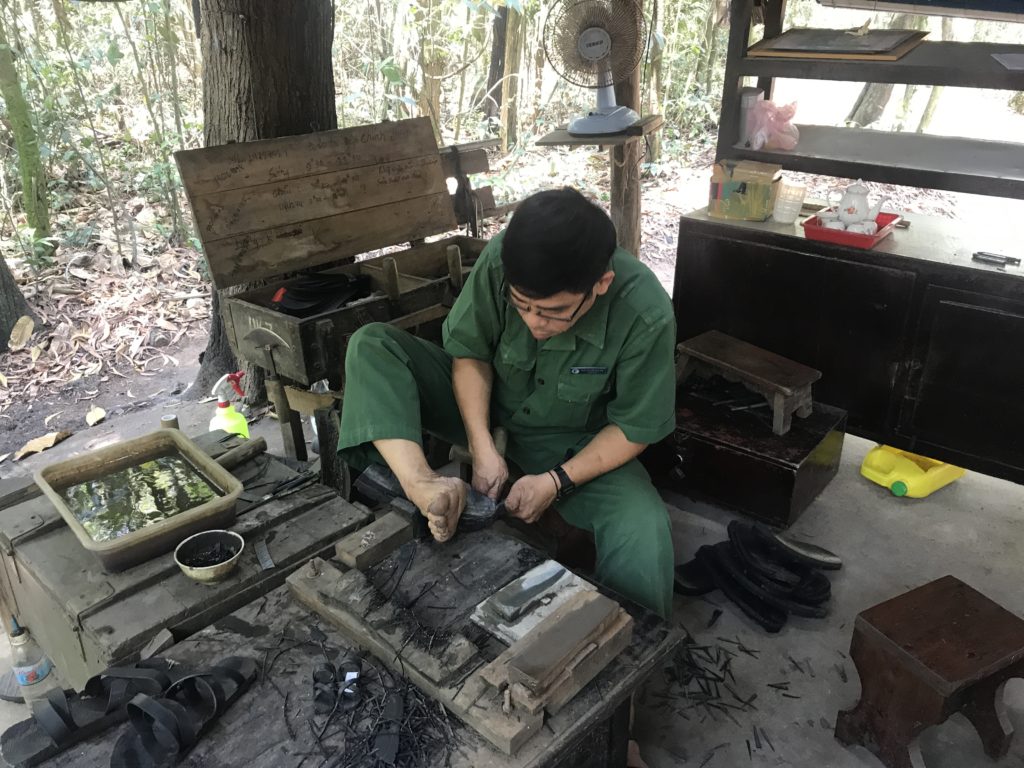 Towards the end of the forest there were various huts showing small exhibitions. We saw weapons, clothing and shoe making (pictured above). The shoes were made to fit backwards so the Americans would be confused and follow the footprint trail in the wrong direction. Quite ingenious.

Unfortunatly someone decided it’d be a good idea to have a shooting range here. That’s about on par for crassness as those Americans posing on the tank earlier. People were doing it though. Lots of people by the sound of it. I’m very anti-gun anyway, so obviously I’d disapprove. But seriously? A shooting range at a historical war site? Urgh.

At least the day ended on a good note. We had tapioca root, served with salted, chilli peanut powder and tea. I’d never had tapioca like that.

One of the benefits of these tours is the new foods you get to try. The Vietnamese are very liable to try and rip you off. They really do know all the tricks – overcharging, giving the wrong change, handing you something then demanding an extortionate price for it, pretending you’ve given them a lower amount note than you’ve actually done…so it’s nice to be able to try new foods in a safe setting. I wouldn’t want to try and buy them in a market/stall without being mentally prepared first!

Anyway. This was a weird day. Interesting, horrifying, scary, enlightening, irritating…I’m glad I did it though.