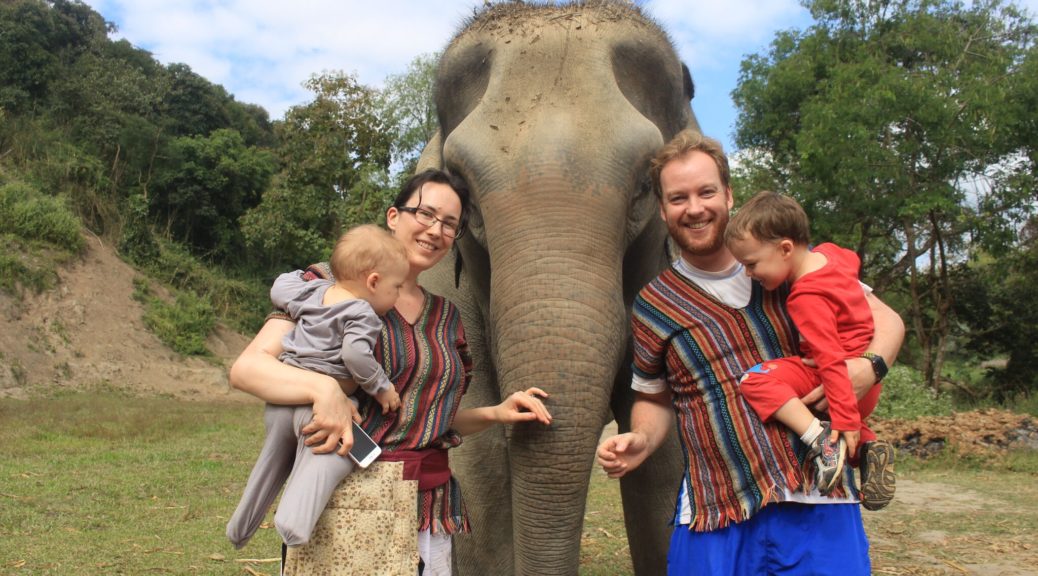 Our nearly 3 year old, Jack, loves animals so it was a no brainer to go to an Elephant sanctuary. There are many ways to see Elephants in Thailand, but some are less ethical than others. It’s common to people riding elephants in Thailand (we saw some on our drive out), but thankfully now Thai tourism is turning away from such practices. I’ll go into detail a little later about the history of elephants in Thailand.

We opted for a full day tour at the Elephant Jungle Sanctuary, which is one of a few sanctuaries for elephants that have been popping up all over Thailand. These sanctuaries take in or purchase abused elephants, give them a new home and take care of them. They invite tourists to come and spend time with the elephants to help pay for food and staff.

The sanctuary is located in Doi Inthanon national park, about 1 1/2 hours South West of Chiang Mai. We drove to a nearby temple where we waited for our guide to pick us up in a 4×4. Once in the vehicle, we were driven up some increasingly steep and windy roads. Then we left the road to go down a very steep dirt track into the forest! Jack, Cade and I got to sit up front with the drive. It was a little like being at the front of a rollercoaster. I definitely held my breath a couple of times, seeing the path drop away in front of me.

Eventually the forest cleared and we could see a large expanse below us with several elephants roaming the grounds. Think circle of life from the Lion King – ponds, grassy areas, hills and animals wondering around freely. Calm and idyllic. Seeing elephant riding on our way out put me on edge, but this area was totally different.

The area is split into camps, with several groups of people going to different camps across the sanctuary. Ours had toilet facilities, which were basic, but fine. We were given Karen hilltribe clothing and an intro on the Sanctuary.

History of the Elephant Jungle Sanctuary

It had been open for 3 years. At the start they had 3 elephants, but now have 82 elephants across a few locations (one in Phuket and some others in Chiang Mai). The 3 inital elephants were given to them because the owners wanted the elephants to be taken care of. Since then they have taken, bought or bred the rest of the elephant.

Most of the elephants were adults, but they also had one 4 year old and one year old elephant. The year old was around the same height as Jack!

We were told to take some food and go down to meet the elephants! They had a box of bananas and squash. We grabbed a few pieces each and walked down the hill.

The elephants obviously knew the routine – as soon as they saw us coming they walked over. None of them move fast enough to be worrying, but it’s still pretty intimidating seeing a 10 foot tall elephant coming towards you!

They were lovely creatures, though. They don’t hear or see well, so they rely on their sense of smell to find the food. This meant that they’d reach their trunks towards you and feel around until they found whatever you were holding. Some of the karen tunics had pockets in which people kept their stash. The elephants certainly weren’t fooled though! They’d reach straight into the pockets to get those bananas.

Jack was a little scared (understandable – they were pretty big). I spoke to another parent on facebook who took her little girl. Apparently she absolutely loved it, so I guess it’s just down to the individual child. Jack’s often a little wary of animals. He did well, though, and by the end was much more comfortable with them.

If you were particularly brave, you could say ‘bon bon’ to them (loudly, as they can’t hear well). They’d then raise their trunks in the air and open their mouths. You then put the food directly inside. The handlers stressed to us that we should do this slowly – the elephants wouldn’t chomp down. I’m glad they told us as it’s quite an experience putting your hand inside their mouths. You have to put it fairly far in to make sure it doesn’t fall out, so your hand will touch the elephant’s tongue!

We walked over a log bridge to meet another herd of elephants, which had the 2 smaller elephants (4 and 1). They were pretty cute! A lot more skittish than the adults so you had to watch yourself a lot more. At one point they were playing together and one moved my way fairly quickly. I had to leap out the way and into the people standing behind me – I didn’t want to be in the path of even the smallest elephant!

The handlers brought out some bottles of water that we could feed directly to the baby. We held it’s trunk and poured the water in. It then curled up it’s trunk to put the water in it’s mouth. Very very cute!

After this it was back to the camp for lunch and to make the elephants’ ‘medicine’. This is essentially a digestive aid for them, as they don’t chew as well as other animals. We were shown a piece of elephant poop – it was dry and fibrous.

They create a mixture of mango/turmeric, banana, cooked rice and raw rice to feed to the elephants. We made balls of it so we could feed it directly to them.

This was a great section for the kids. Our handler was really friendly and got them involved in peeling bananas for the feed. We then all helped in mashing up the mixture and making it into balls.

Mud bath with the elephants

After that we got changed into our swimsuits and did the bit we had all been waiting for – a mud bath with the elephants.

Elephants use mud for protection from the sun, so it really felt like we were helping the elephants in this part. I couldn’t help but be aware that in most cases the elephants would be better off without humans. They could get food and survive perfectly well without us. The only reason that Elephant Sanctuaries are necessary now is because there’s so little elephant habitat left – humans have wrecked most of it. However, the elephants wouldn’t necessarily be able to reach all of their skin to coat it in mud, so we could actually help them with something they wouldn’t get in the wild. The elephants looked blissful! That was a nice feeling. 😉

Some of the elephants remained standing, while others rolled around in the mud. We picked one that was on it’s side. We picked up handfuls of mud and spread it on the elephant’s back. Jack was still a bit wary, but he was happier with an elephant lying down. After a while I persuaded him to put some mud on our elephant. After he’d done it once he was hooked. I should’ve guessed – what little boy wouldn’t like picking up handfuls of mud and chucking it at an elephant?!

Playing in the waterfall

After that we followed the elephants to the waterfall, where they bathed and played in the water. We were given plastic containers which we could used to throw water at the elephants and each other. This was a lot of fun!

After the elephants left we had a bit of time to bathe in the waterfall ourselves. The pool was deep enough to swim, which many waterfall pools aren’t. I’d have loved to swim, but unfortunately we hadn’t brought costumes, and both boys were a little tired and cranky by this stage. The lack of naps were taking their toll!

The staff were super nice, though, offering to hold Cade so we could go in. In other circumstances I think this would be a great activity for kids. We still managed to get some play time with the elephants in.

Leisurely feed and saying goodbuy to the elephants

It was nice to just watch them doing their thing without too much human involvement. Some people were feeding them, but we just hung out and watched.

History of elephant riding in Thailand

Expert vagabond has a good article about why you shouldn’t ride elephants in Thailand. To summarise:

Wild elephants won’t let humans ride them, so their spirits have to be broken at a young age. Elephants are ripped from their mothers as babies and tortured into submission. Photographer Brent Lewin captured this horrible image of the elephant torture in Burma. In the past this has been done in Burma, and then the baby elephants were illegally smuggled into Thailand for the tourist trade.

Thailand’s doing a lot more now to stop this happening, but there’s still a huge problem with how you care for elephants that have had this done to them. For one thing, their handlers often won’t just let them go – they need to be reimbursed. This means that funds are needed to buy elephants. We saw elephant riding on our drive up the sanctuary:

It’s really sad to see these majestic creatures shuffling along in a line with humans strapped to their backs.

Are elephant sanctuaries in Thailand a good thing?

I considered whether we should just avoid all tourism involving animals while in Chiang Mai. Should we really be funding something like this. In the end I decided that it was ethical enough to consider doing. Having done it, I feel much better about putting money into elephant sanctuaries in Thailand.

Obviously it would be preferable to have elephants just roaming freely in the wild. However, due to lack of habitat and history of elephant abuse, it’s more rare. Even if they were released into the wild they may not survive. The habitat just isn’t there. And even if it was, captive elephants are used to a particular way of life – food and water are brought to them.

Chemicals from farms are also a problem. Elephants will consume food coated in chemicals and get sick or die. We were told to wash our hands thoroughly before feeding the elephants, especially if we’d just applied suncream.

Hopefully, I’m not just being naive, but from what I understand, these sanctuaries are necessary to help elephants survive in Thailand. Tourists pay to interact with them (in more ethical ways than riding them). This then pays for the sanctuaries to continue. I felt pretty good about our day. The elephants seemed happy and well cared for. I was happy that our money would go to their food and care.