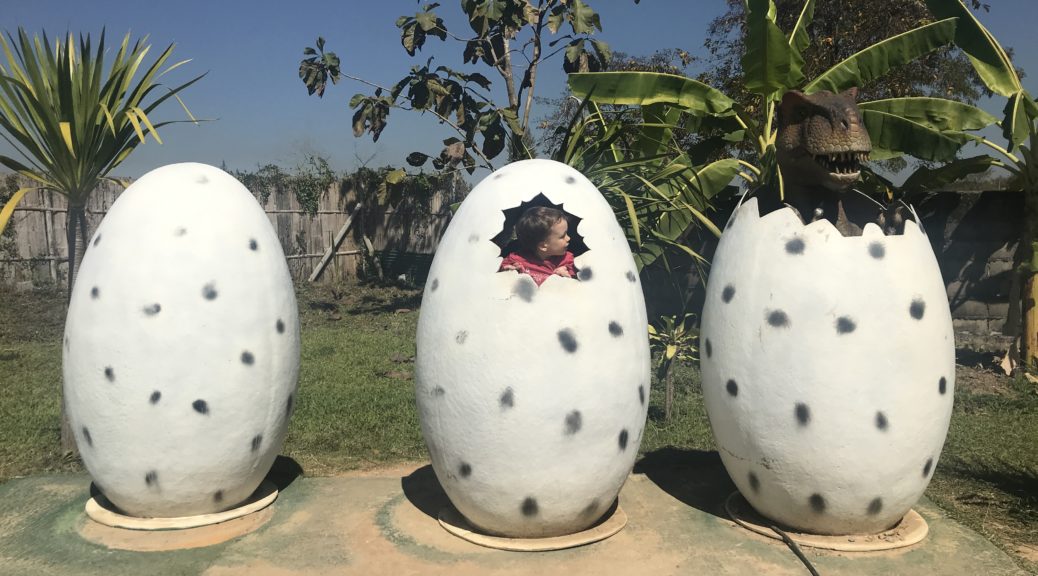 We found out from our Thai nanny about the new Hidden Village dinosaur park in Chiang Mai. With a 3 year old boy there was really no question of whether or not we’d go.

There’s a pretty spacious car park in front, with cows grazing in the field opposite. After a few minutes of convincing Jack that the park would also be as fun as watching the cows, we entered. Admission fee for Hidden Village was 200 baht per adult (£4.50/$6.50), with children under 100cm going free. I’m pretty sure Jack’s over 100cm, but they still didn’t charge us for him.

The first section of the village is a large, open space with model animals and insects. It’s pretty neat. They have a snake that you can climb into and take a photo as if it’s got you in it’s coils. We saw a group of hill tribe children clambouring all over the chameleons. Jack ran from insect to insect, squealing with glee all the while.

Oh, and how could I forget. They also have a giant tree trunk with butterflies on the outside and spiders on the inside. And guess which parent was looking after Jack when he decided to go through that one.

In all seriousness, though, it was pretty lovely. There are fountains and streams running through the park, as well as live pigs sunbathing next to the picnic tables. There’s loads to keep kids entertained and it’s quite a picturesque place for adults to wander about.

There’s a small farm and petting area, where the kids can ride horses and feed the animals. They even have bottles of milk to feed the baby lambs for a small fee.

There were about 4 enclosures, with shetland ponies, sheep, pigs, and horses. I wouldn’t make a trip specially for it, but Jack did enjoy seeing the little ponies and piglets.

Eventually we got to the real reason we’d come to the Hidden Village – the Dinosaur Park, complete with an anamatronic T-Rex.

As you approach the dinosaur section, you can see (and hear) the enormous Brachiosaurus. Jack was too distracted  by the ponies to be excited by it, but even for adults it’s quite impressive. The thing’s enormous! It’s probably still smaller than a real Brachiosaurus was, but even so, when you stand under it’s tail (that actually swishes), you feel very, very small!

The park has a little path meandering through it. Stationed along it are dinosaur enclosures. They had all the usual dinosaurs like a Triceratops, Stegosaurus, T-Rex and Velociraptors. But they also had some less usual ones that I didn’t know much about before. The Dilophosaurus (poison spitting lizard from Jurassic Park) was quite impressive. The Velociraptors naturally were terrifying. They had an enclosure of 3 of them and the combination of sound effects and animatronics made us walk by quite quickly!

There was a mound between the Spinosaurus and Allosaurus, where you could stand between them, a metre of so from each, around head height! We certainly didn’t linger there! 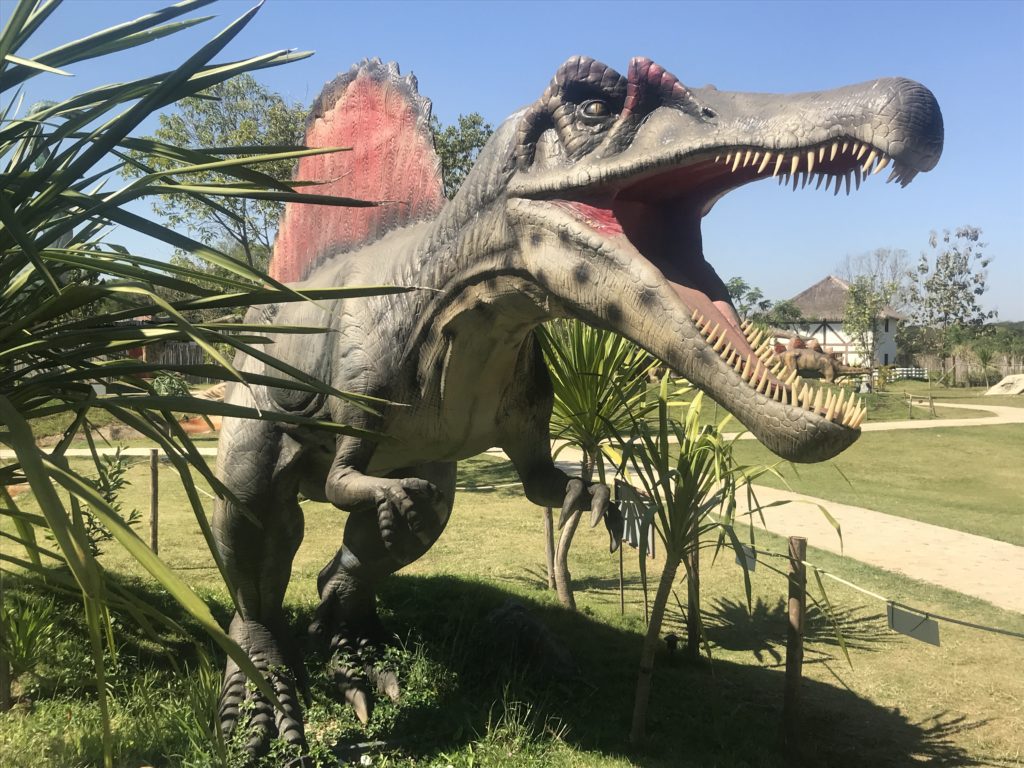 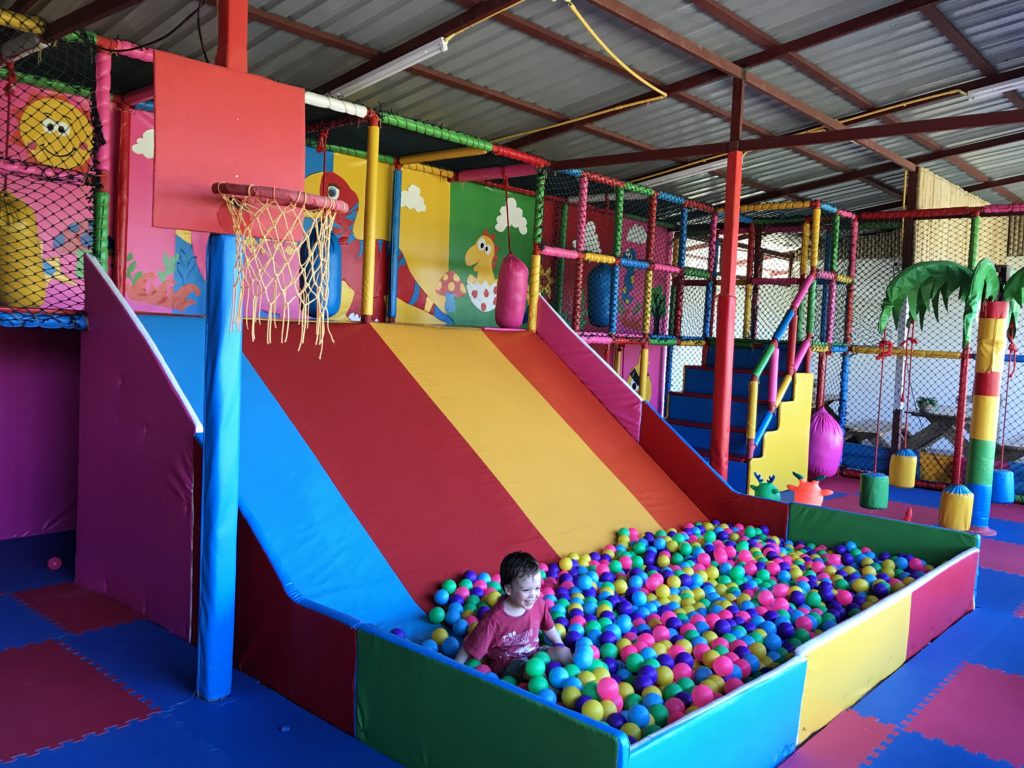 There’s a big, free outdoor playground too. It even has a trampoline! We didn’t spend much time there as there was just too much to do in one day, but we’ll definitely try it next time.

As with most of Thailand there were plenty of places to eat and drink. We particularly liked the round smoothie bar with thatched roof. With yummy iced fruit smoothies for 50 baht a piece it made me feel like I was on a beach holiday.

Like typical Westerners, we went straight for the air conditioned barn! Food was good, although expensive for Thailand. They did give us a free pasta dish for the kids with our adult meal, so that was nice. They also had an outdoor eatery with Thai dishes for Thai prices (50 baht per meal).

Final verdict on the Hidden Village and Dinosaur Park:

All in all a great day – we’ll definitely be returning!