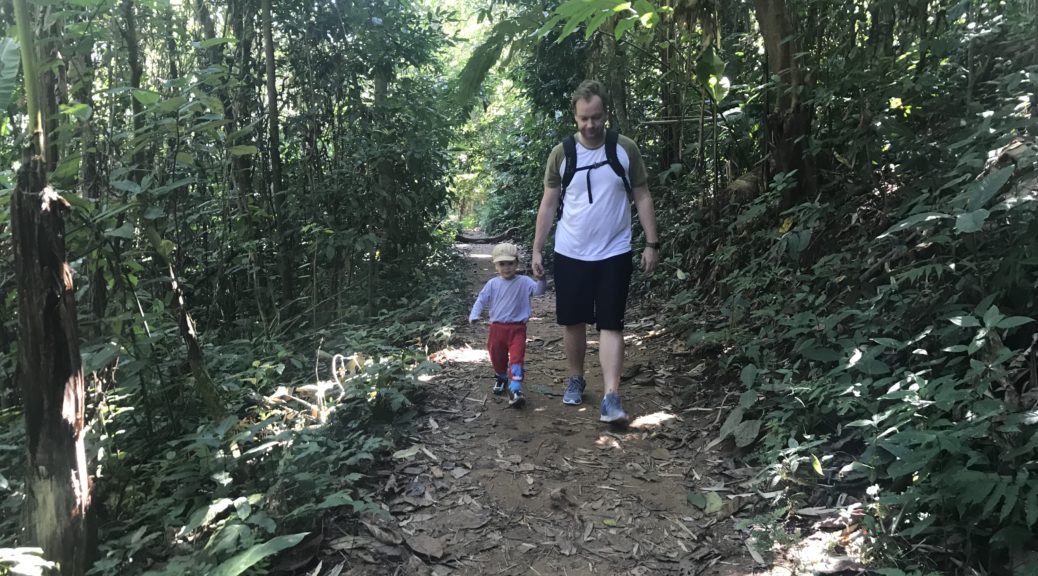 Khun Korn waterfall is known as one of the most beautiful waterfalls in Chiang Rai. It’s a 1.5km moderately challenging hike through the forest to get to it.

We weren’t sure about whether to attempt the hike with our 2 small kids (11 months and 2 years 9 months). With very little information online about doing this walk with children, we decided just to go for it.

The hike took around 40 minutes up to the waterfall and around 30 minutes back, as the return was easier. Jack walked most of the way on his own, only needing help over streams and up some of the rocky bits. It was moderately challenging towards the end, with a few steep bits and slippery sections. There were plenty of parents with kids on this walk, though, so if you’re used to hiking it’s perfectly manageable.

Hiking up to Khun Korn waterfall with small children 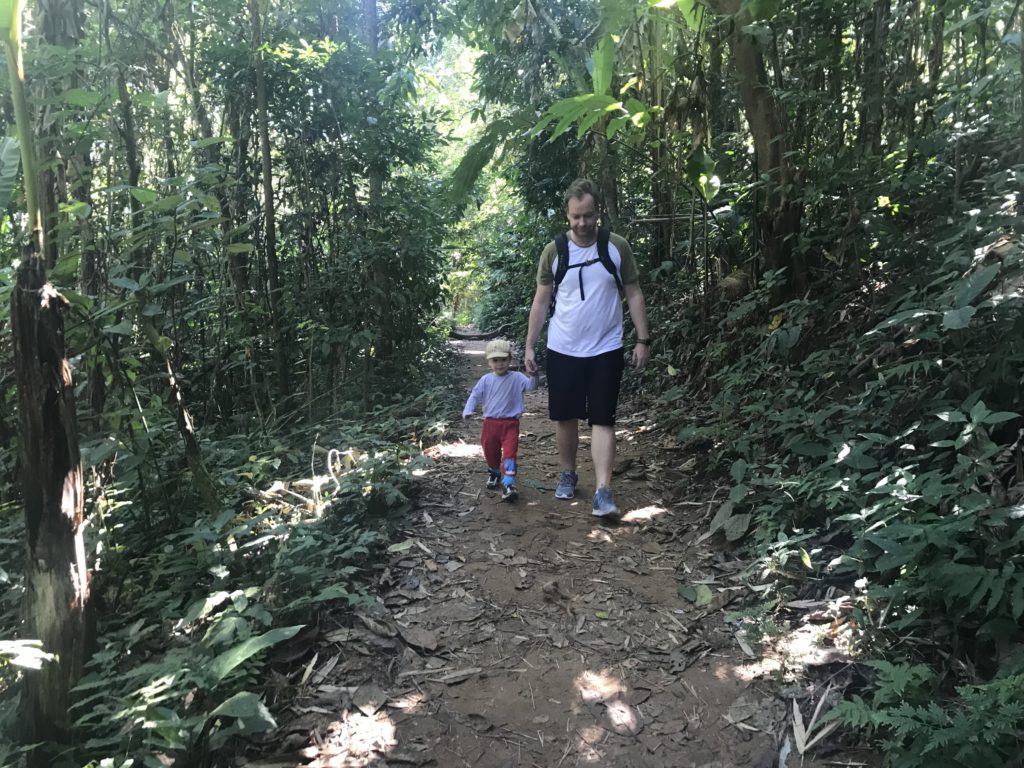 The hike begins easily enough, with a mild incline up a muddy path. It’s a beautiful walk right from the start – you’re surrounded by trees and can hear the sound of the river from beside you.

The path itself was rocky and not too slippery. There’s very little ‘scrambling’ needed right until the end – Jack had no trouble with it.

We read online that there were loads of bugs, but we didn’t experience this ourselves. I dressed both kids in long sleeved trousers and tops, but that was probably unnecessary. We didn’t see any mosquitos at all. There were a few little flies and some butterflies, but that was about it!

There are a couple of small streams to cross on the way up to the waterfall. We carried our kids. We passed other, slightly older children who happily crossed them alone, though. I missed the rock once, but apart from that managed to stay dry. It is a little difficult at times, though, so if your balance isn’t great then be prepared to get your feet wet! None of the streams are more than an inch or two deep.

We enjoyed the bamboo section. The pathway was easy to walk on and the scenery was beautiful. There were some interesting formations and other good spots for photographs along the way.

Counting down the meters!

There were signs every 200m on the way up to the fall. Although they did serve as a good confirmation that we were on the right track, I noticed that they seemed to be getting further apart the closer we got to the waterfall(!).

It definitely got tougher towards the end. At the start the hike resembles a walk through the forest, by the end you walk up some steep slopes and even scramble up rocks in places.

Jack was loving it though – he relished the challenge and did most of the walk himself. He was very tired by the end, though.

We made it! The last 50m or so is rocky and slippery. The spray from the waterfall soaks most of the surrounding area.

There is a handrail, though, and they’ve added stone steps. We found it only moderately difficult to go down with the kids.

Bathing in the waterfall (or not)

Some people talk about bathing in the waterfall. Personally I wouldn’t – the pool itself is small and the waterfall’s huge. There isn’t a lot of room to swim, and I’d be nervous about going so close to the crashing water. There are much nicer waterfalls out there for swimming in. It might be better after a bit of rainfall, although I would imagine that’d make the hike more challenging.

We managed to get down to close to water level, although that was really tough with the kids. There isn’t a handrail all the way down and the path is slippery.

Once you’re down at the water you’d still need to clamber over rocks to get into the pool. Then there’s a bit of a step down to get from rocks to water. Adults might be OK, but there’s no way I’d do it with small children.

Secret areas off to the side of the path

We did, however, find a little secret path down to the water off from the main path. There were a few of these around. I thought they were a much nicer way to have a dip in the water than the main waterfall pool.

There was a little bit of clambering involved, and Karl put his foot in a muddy puddle. But mostly it was straightforward to get down to the water. We let Jack spend a bit of time throwing stones into the water, while I took my shoes off and dipped my toes in.

The whole trip took us just under 2 hours. It was about 40 minutes or so up to the waterfall, probably quicker going back. Jack loved it. We also met 2 or 3 other parents with kids along the way, all of whom looked like they were having a great time.  I would say that it’s a perfectly reasonable hike to do with any age kids.

Other things to do in Chiang Rai with kids