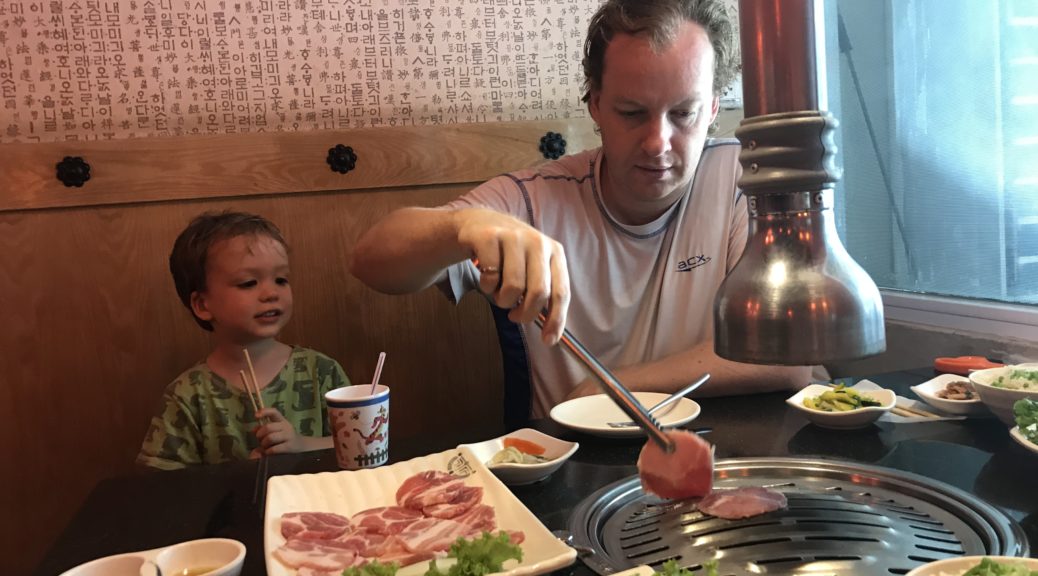 We’ve been a bit lazy with our lunches recently (the restaurant in our complex is good, cheap and they speak English). We decided to be a bit more adventurous and take the boys out to a Korean BBQ.

For those who don’t know, Korean BBQ invoves buying your meat raw. You then BBQ it yourself on a hot plate in front of you. When you arrive they come and take the cover off the centre of the table. Then they bring a bucket of coals, which they put into the centre. This is then covered with a metal grill. There are chimneys in the ceiling which they pull down over your grill to suck away all the smoke. It’s pretty ingenious, really.

Jack’s very good with not touching hot things. We warned him before they brought out the coals and again throughout the meal. He was quite intrigued by the whole process, so happy to just watch us add the meat. I was going to let him put meat on the grill if he wanted, but he was quite wary of the grill (as it should be).

Korean side dishes for kids

The thing that I didn’t anticipate about the meal was how good all the side dishes would be for the boys. The meat came with 8 or so little bowls of yumminess. Cade devoured the potato salad and softly cooked veggies. Jack went for the tempura, rice and BBQ pork. He even ate a couple of handfuls of beansprouts when distracted by another little girl.

We also got a rather delicious smoked mackeral. That certainly didn’t last long!

The setup was platforms with cushions to sit on and holes in for the tables. This was a mixed blessing. On the one hand it gave Jack a bit of space to move around. On the other he did start walking round the platform. Especially when the table next to us showed up with a little girl his age! None of the adults seemed to mind though – they were perfectly content to have the kids entertain each other, so we figured it was fine! 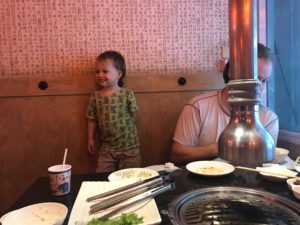 So, in conclusion. Korean BBQ with kids: a win! If your child’s a bit grabby then it may not be for you, but we found that Jack was entertained enough to be quite well behaved.