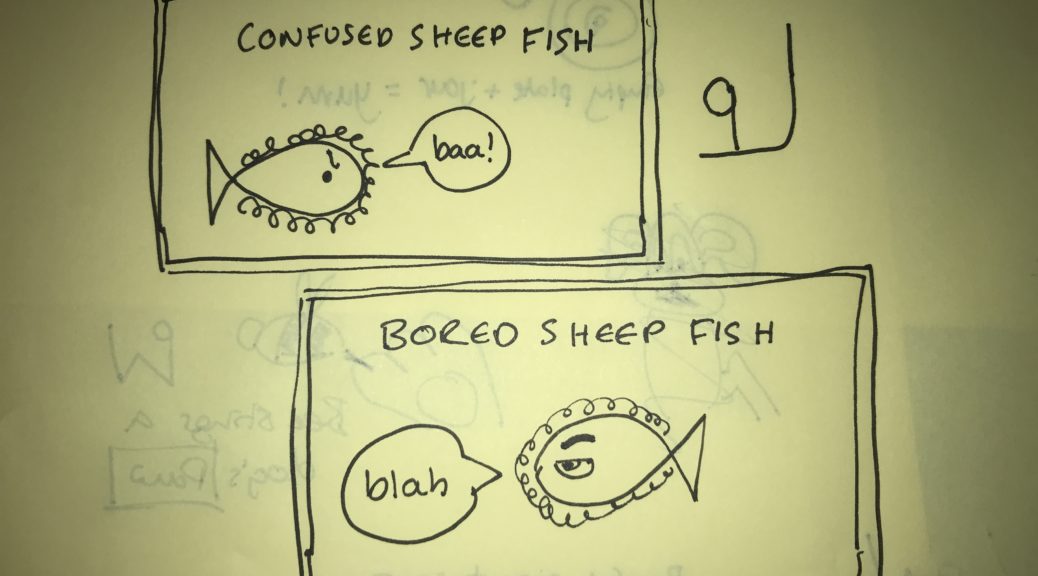 This is day 2 of my ‘Learn Thai in 2 weeks‘ challenge. Yesterday, I found some good resources to help me and started learning the most common letters in the Thai alphabet.

Today I carried on with my course from LearnThaifromaWhiteGuy.com and memrise.

Learn Thai from a White guy has been great for helping to pronounce the letters. He takes a long time to explain exactly where your tongue should be to get the right sound. I’m appreciative of this after hearing so many stories of people who learn Thai, only to find that actual Thai people can’t understand a word they say.

The pace is slow, though. I’ve started to try and pick out the letters I know on Thai signs and I’m keen to learn more.

Memrise has been great for just letting me learn letters and their sounds at my own pace. The thing I’m still missing, though is letter groupings.

There’s a lot of duplication in Thai – there are 44 consonants and only 21 or so distinct sounds. And even some of the ‘distinct’ sounds are pretty similar to each other. What I really want is diagrams that show me which letters are basically the same. I can’t seem to find this anywhere, so I’ve been creating my own.

For example, there are 4 letters in Thai that all look similar to a ‘w’: Offering tray พ, bee ผ, lid ฝ and teeth ฟ. 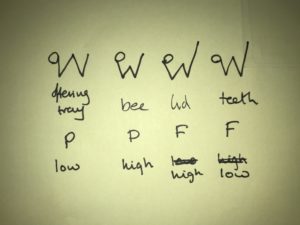 Writing it out like this makes it more clear what the differences are.

This isn’t a hard and fast rule, but I believe it is a common trend. In any case, it makes it much easier to distinguish these 4 letters.

The next challenge I’m finding is that there are a lot of elements to Thai letters: shape (the symbol), it’s name (e.g. ‘offering tray’), it’s sound (e.g. ‘P’) what it’s called (e.g. ‘Paw paan’) and it’s tone (low, medium or high). Further, there are more variations on how you aspirate sounds than we have in English.

The confused sheep fish (i.e. how to memorise Thai letters)

So how do you remember that the symbol ป is the ‘fish’, that it’s an unaspirated ‘p’ (a ‘b’ sound in English), and that it’s called ‘bo blah’?  You draw a silly cartoon, of course.  I give you the confused sheep fish who says ‘baa’ (the sound ‘fish’ makes when combined with the ‘ahh’ vowel). And then there’s the bored fish sheep who says ‘blah’. 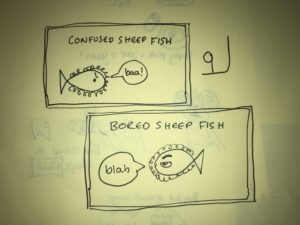 I’m aiming to try and say something to our nanny in Thai tomorrow. Currently she can understand most of what I say when I talk slowly in English and gesture. I don’t see any reason why I shouldn’t try the same in Thai. Here goes!