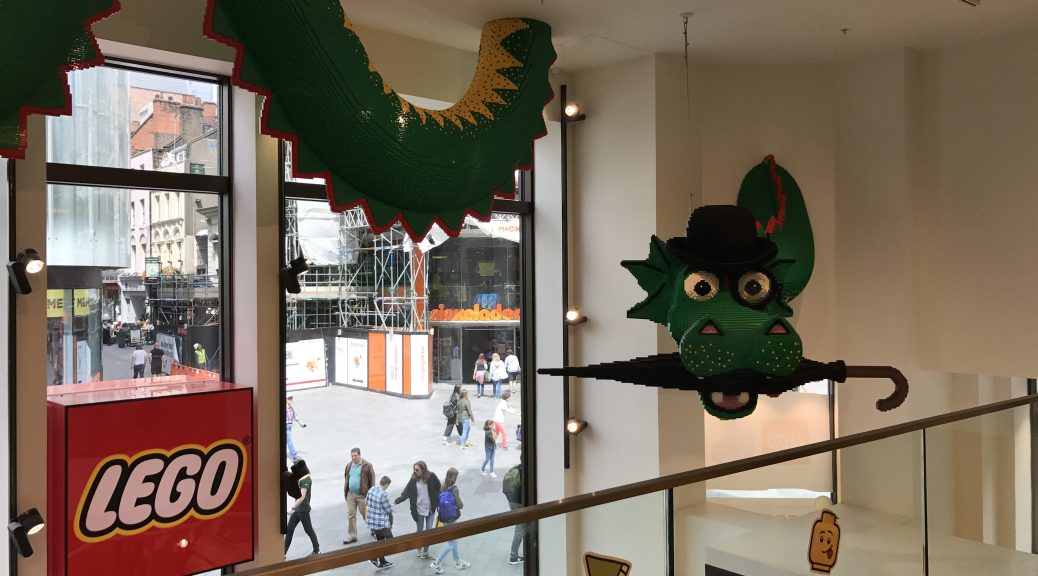 I’ve just been to the Lego store in Leicester Square and, well, everything is awesome.

When you enter the store (to the tune of ‘Everything is Awesome’, of course), staff greet you with Lego made signs saying ‘hello’, Lego microphones and even a Lego guitar. You walk through a full size Lego London Underground gate.

Once you’re inside, as well as seeing models from some of the best Lego kits you’ll find maps of London, a bus, a telephone box, a Loch Ness Monster and more.

The store is on two floors and there’s a lift if you’re there with a stroller.

Upstairs, they have two Lego and one Duplo station, if you’re in the mood to build something. Seeing that made me want to go straight to my 2 year old’s nursery and bring him back for a play!

They also have a totally cool booth called the ‘Lego Mosaic Maker’. Apparently it’s the only one in the world. It’s similar to a standard photo booth (although made out of Lego, of course), but once you’ve had your photo taken they’ll print it out as a Lego mosaic, complete with all the required pieces. It costs £99 and comes with 4,502 pieces, in five colours. You’ll use 2,304 of them to make your portrait (the boxes come pre-assembled). Very cool.

Aside from all the other fun stuff in the store it was great to be able to browse such a wide range of kits. They had a model death star, with surprisingly cute little Royal Guards. Sorry, did I say cute? I meant fearsome and terrifying.

They also had lots of kits for the younger kids, like a Lego watch complete with mini-fig that you can assemble yourself.

In conclusion: a well designed and fun store that is worth going to visit even if you just want to take some photos and play with some Lego. And it’s opposite the M&M and Nickelodeon stores, so you can visit all 3 in one trip! Definitely worth visiting if you’re looking for something free to do with kids in London.