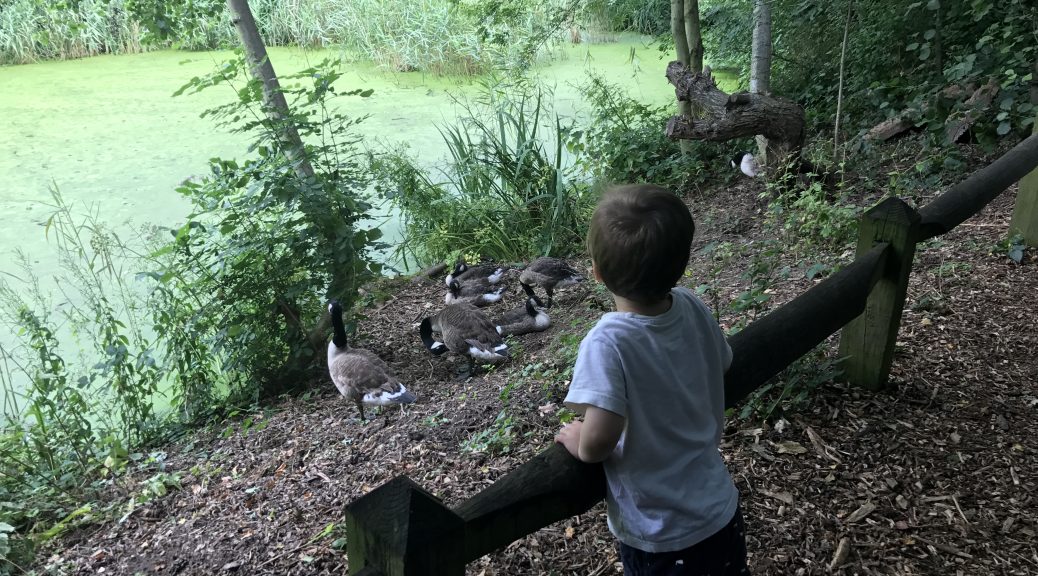 I’ve just got back from a great day out in London Kings Cross with my two kids. And people say you can’t have a family in the city. We did spend a bit of money, but most of the things we did were free. So if you’re looking for free things to do in Kings Cross with kids then read on!

We started out by going to Caravan in Granary Square for brunch. Caravan brunch is becoming a bit of a feature of Kings Cross – on sunny days during the weekend you’ll find queues out the door for a table there.

We got there just after 10 (when it opens) and there were still tables left. We were shown to a lovely table outside, so Jack, my two year old, could watch the ‘bubbles’ (the fountains in Granary square).

First we had coffees and smoothies. Karl had a carrot juice and I shared a banana, date and tamarind and cacao smoothie with Jack. Needless to say, he was ecstatic with his big boy drink!

For mains, Karl had a crayfish salad and I had the tomato and red pepper ragou with baked egg and flatbread (which my baby enjoyed eating/throwing on the ground). We got an aubergine paste with sausage, yoghurt and flatbread for Jack. Yes, we could’ve given him some of ours, but then we wouldn’t have been able to try his too now would we?

A walk along Kings Cross canal

Jack was adamant about seeing the ducks, so we then went for a walk along the canal. It’s a great place to walk with a pushchair – the walkway is new, wide and smooth so perfect for a walk with your children. We saw ducks, geese, swans and signets. Toddler heaven!

When we saw that Coal Drops Yard was open, we had to go and have a look. For the last few years Kings Cross have been doing various regeneration projects and this area has been fenced off for ages. It’s still definitely a work in progress, but it was exciting to see it none the less. And our two year old loved seeing the diggers!

The Somers Town Bridge is lovely – it takes you across the canal from Granary Square to Somers Town, near Kings Cross Station. Once it’s all complete it’ll give a great view over the Coal Drop Yard. And for those of us that enjoy the St Pancras Children’s library it gives a much quicker route there too.

After that it was back home for the all important lunch and nap!

Stopped by Cubitt Square to watch a bit of the Wimbledon

Once the boys were up, we went out to watch a bit of the Wimbledon at Cubitt Square. They’ve set up a screen and have various food stalls. The whole area is dubbed ‘Strawberries and screen’. There were plenty of families out to watch the tennis, eat strawberries and cream, drink prosecco and lounge on the grass. I was a bit sorry that it was the last day – it’s a really pleasant area.

Outside of ‘strawberries and screen’, Cubitt Square is still a lovely place to take children. There’s a big grassy area that they can play on on one side and fountains on the other. There are few cars on the surrounding roads and the ones that do go there move slowly.

After watching the Wimbledon final, we went to the Camley Street Natural Park. This is a wooded area with a pond, just next to the canal, across from Granary Square.

We always enjoy coming here with the boys. It’s free to enter, and the path is mostly suitable for pushchairs. It’s a wood chip path, so you might struggle with city pushchairs like the Babyzen Yoyo, but anything a bit more rugged would be fine. There are a few small steps to do the last loop of the walk, beyond the pond, but you can either skip that section, or try and do it with your pushchair. We have a mountain buggy duet pushchair and it was fine.

We spent an hour or so wondering round. Jack led the way (there are fences around most of the walk, so I was happy to let him walk about without holding my hand the whole way). It was amazing to be in the middle of London and be in a covered, wooded area.

See the fountains at Granary Square

Seeing the fountains at Granary Square is one of my toddler’s all time favourite things to do. With 4 big rectangles, each full of little fountains there’s tonnes of space for kids to run around and play. There’s only a very small layer of water beneath the fountains, so even small children can play safely. The fountains are bordered by benches on both sides, so mum and dad can sit while watching the little ones.

During the day the fountains are set to various, continuously changing patterns, sure to keep your little ones entertained. At night each fountain is lit up and the colours can also be set to changing patterns. It really is a lovely area for adults and children alike.

Pop into Waitrose to pick up dinner

Last but not least, we popped into Waitrose to get some dinner. This Waitrose is is an old storage facility and like most of Kings Cross they’ve kept some of the more rustic elements in the Supermarket. It won Supermarket of the year 2016 and it’s clear why.

They whole shop is a pleasant, calming and enjoyable place to be. As well as all the food, you can get: smoothies at the juice bar; fresh coffee, baklava, cake or sandwiches at the coffee counter; a deli platter, glass of wine and live jazz at the wine bar (yes, they have a wine bar); sushi grade fish at the fish counter or even do a cookery course at the cookery school. I wouldn’t say this about many supermarkets, but I really love this one.

So, in conclusion, you certainly can live in a city with two kids. And what’s more, you can have a damn good time!