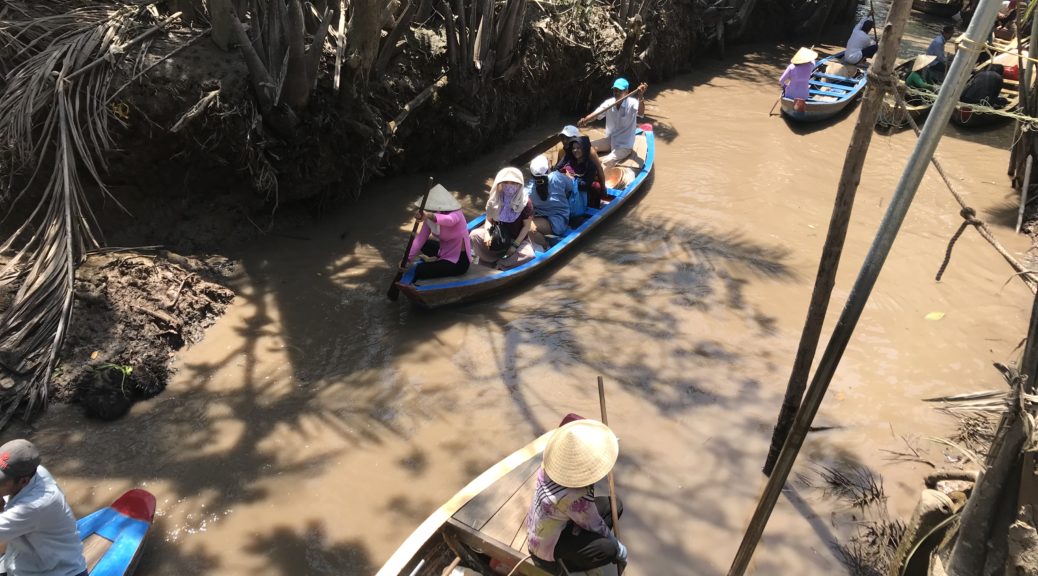 Today we visited the Mekong Delta. The Mekong Delta is absolutely massive – look it up on Google maps and you’ll see what I mean. It spans most of South Vietnam.

We went with Candy Travel on a private tour. There were cheaper group tours, but with 2 little ones who might need extra loo/suncream/snack stops we opted for our own private tour. It was pretty nice – we had a minibus and speedboat all to ourselves and never had to wait for anything.

What is a Delta?

Geography lesson coming up.Sorry if this is obvious to you – I was terrible at Geography, so had no idea what a Delta was! A Delta is ‘a landform that forms from deposition of sediment carried by a river as the flow leaves its mouth and enters slower-moving or stagnant water.’ (Thanks, Wikipedia)

I hadn’t really thought about what this meant before I got there, but it basically means that small islands are created between all the river paths.

Importance of the Mekong Delta for Vietnamese Trade

This is hugely important to this part of Vietnam. Until very recently (the year 2000) it meant that all their trade had to be done by river. Our guide explained that the country was very poor because it took so much time to trade anything from inland. To trade with other countries they had to take it by boat to Ho Chi Minh City, then trade from there. In 2000 they built bridges across to mainland. This opened up potential for trade with the surrounding countries and Vietnam is doing much better because of it.

We took a bus to the tip of the river and then hopped on a speedboat to our first Island – Unicorn Island. 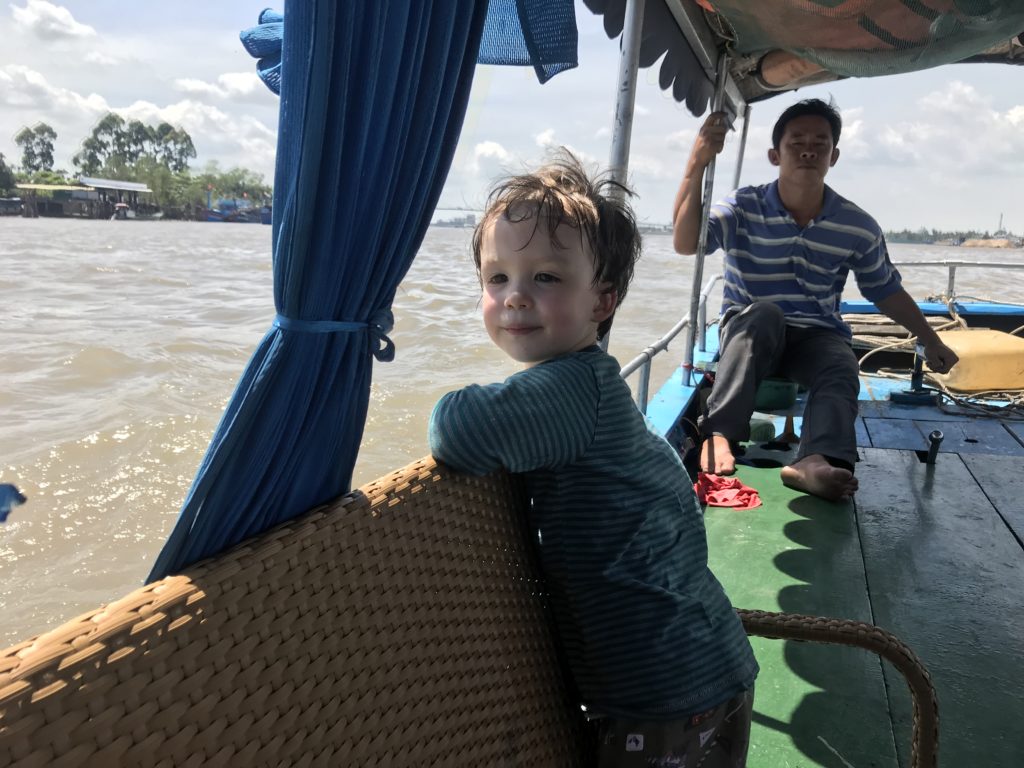 I asked why the Island was called ‘Unicorn Island’. Ok, so I was secretly hoping for stories of Unicorn sightings 😉

Apparently there are 4 lucky animals in Vietnamese culture – Unicorn, Turtle, Dragon And Phoenix. They name their Islands after them. 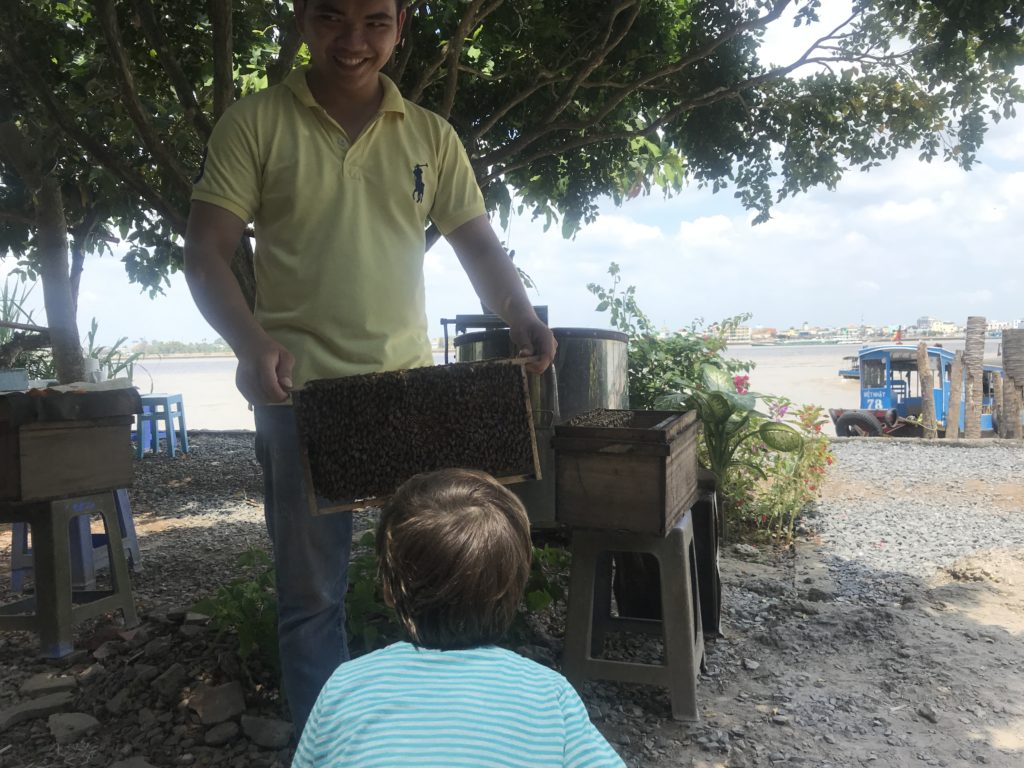 When we entered the first stop we were met with a beekeeper and a hive of bees. No protective gear or casing – it was all just out in the open!

He pulled out one of the hives to show us. ‘Ok’ I thought ‘brave, but the bees aren’t stinging him so I guess it’s ok’.

Then he handed it to Karl! *heartrate increasing*

Karl looked super excited though, so I just went with it and took a photo. Our guide then took the bees off him. I breathed a sigh of relief. Still no stings but I’d be happier once it was back in its case. 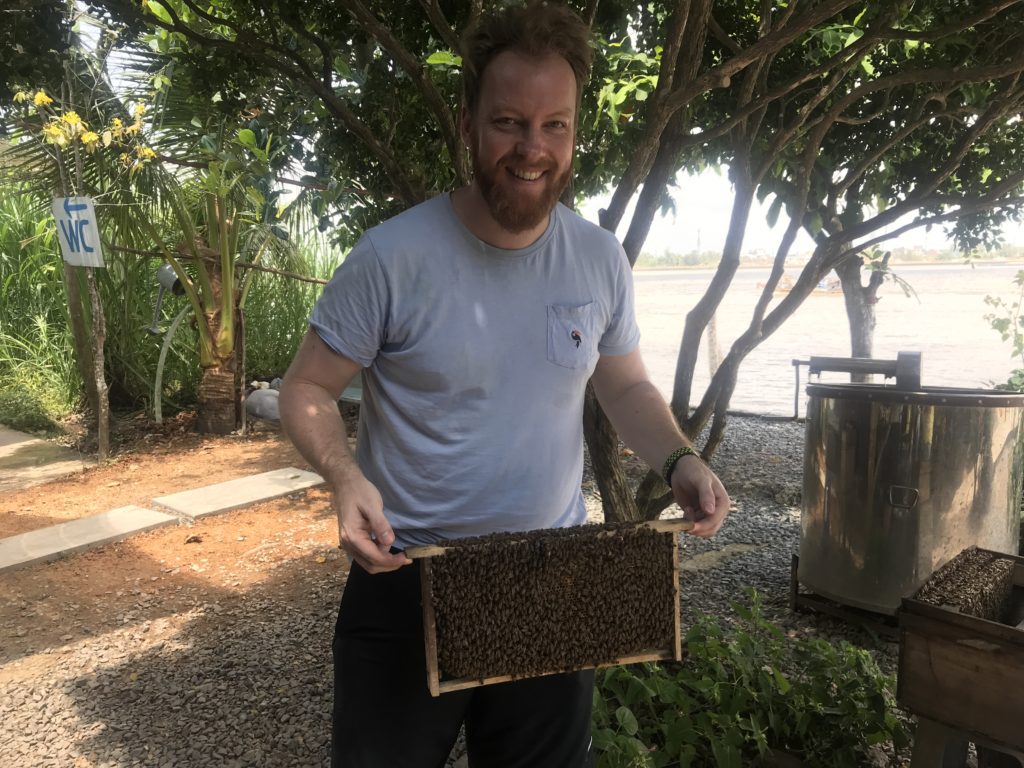 You can guess what happened next. He walked over and handed it to me. Before I knew it I was literally holding a hive with hundreds of bees.

After I got over my shock I realised it was pretty cool! You could see them right up close, milling about.

We handed the bees back and sat down for some honeyed tea and sweets. They showed us the food the queen ate – ‘Royal Jelly’. Apparently it’s full of all sorts of vitamins and has any number of health benefits. I’m sure they wanted us to buy some, but we decided to leave it for the bees. 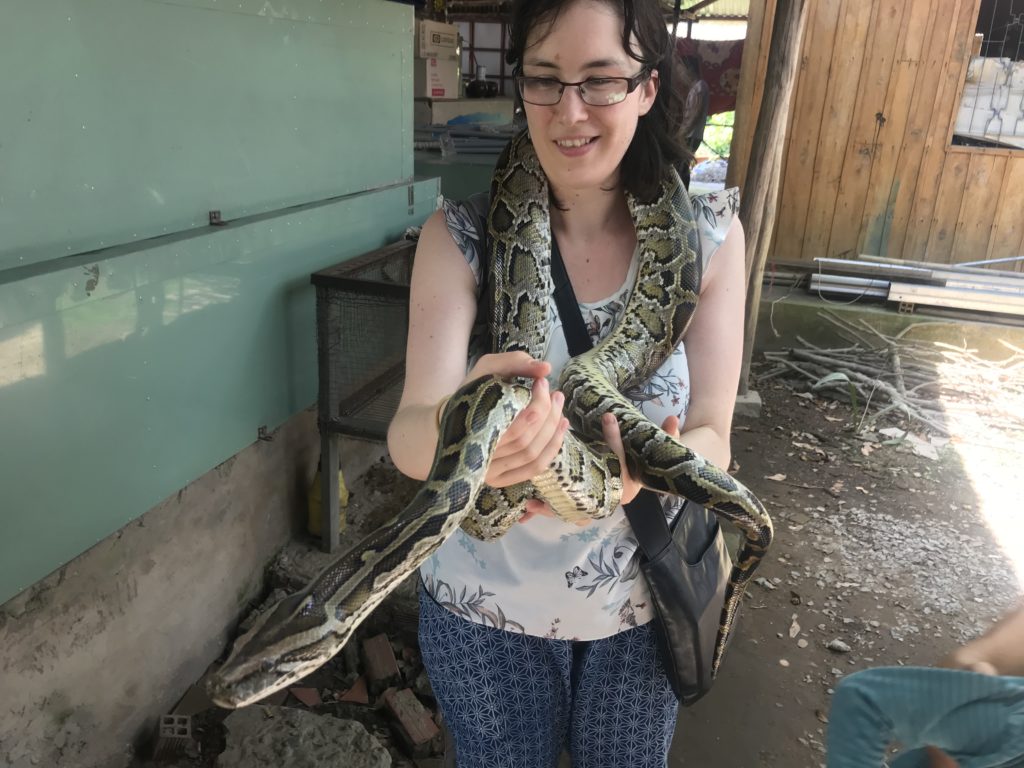 On the way out they had a snake that you could hold. Of course they did. Just there, no preamble or advertising – you walk over and he puts it round your neck. I know it’s totally touristy but I love snakes and always take the opportunity to hold them when I can, so this made me happy.

Again, this was an obvious tourist attraction, but it was great to try some new fruits with a local who could explain what they were. And Jack loved seeing the traditional Vietnamese instruments. For that matter, so did I!

This was one of the stops I was most looking forward to. Coconut candy is a good source of income for the locals and something that is so popular it’s eaten around the world. I was interested in what a Vietnamese candy ‘factory’ would be like.

It was one big, open-air room, with everything happening right there for you to see. Our guide took us through the steps, each of which had an associated piece of machinery:

3) Cook for 45 minuets with caramel, stirring constantly (the fire they used even had coconut husks in it)

4) Mix with flavourings (we tried the peanut butter one)

6) Chop into 1 inch squares by hand

7) Finally, each piece is wrapped by hand

Boat ride through the narrow waterways 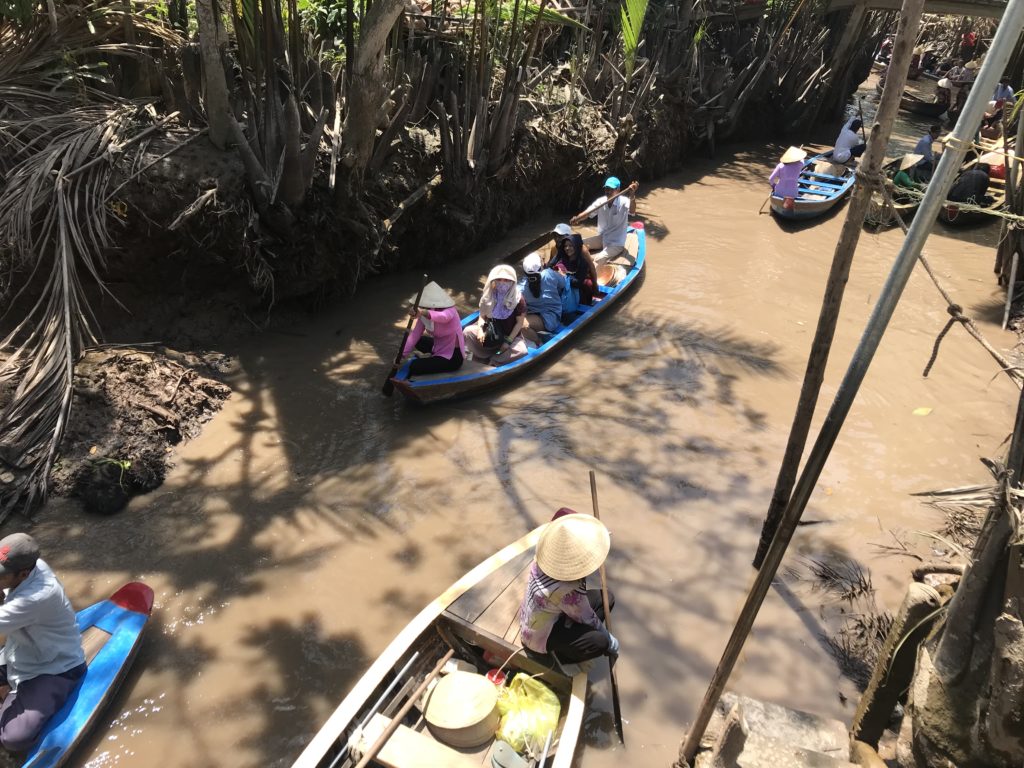 I was nervous about this with two small kids, but ended up doing it anyway. And I have to say – it was pretty cool.

I needn’t have been worried about Jack. He was mesmerised by everything and loved all the boats. Cade was tired, but the boat was sturdy enough to not rock when he wiggled about. I had him in the carrier, which helped.

The ride was hot (very little shade), but really unique and fun. We’d bought traditional hats earlier for around $1 each, we were grateful for them during this ride.

There were lots of boats, but it was surprisingly quiet. I guess everyone was taken in by watching the scenery and lulled by the sound of oars – there wasn’t even much talking.

We were thankful for our private tour here. A tour bus arrived just as we did and were told there was a 20 min wait. We just hopped straight on a boat. It was really hot with very little to do at the boat terminal – I wouldn’t have enjoyed trying to entertain the boys for 20 mins there! 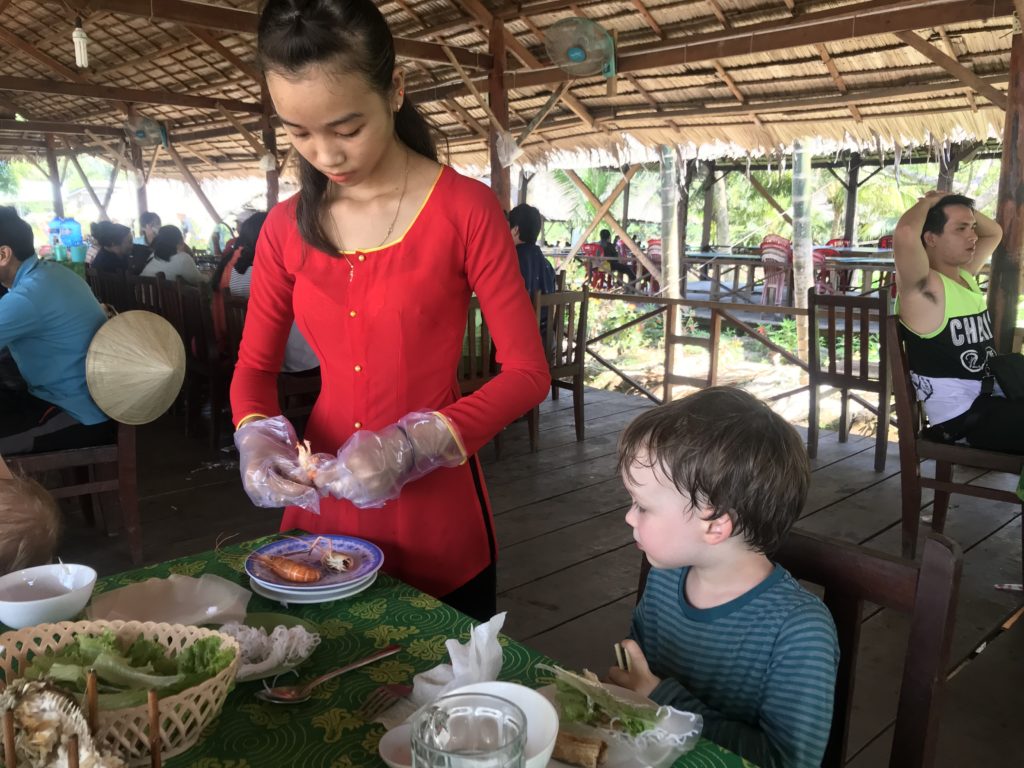 We sat for lunch in a hut by the water.

First they brought out a fish, artistically arranged on a platter. 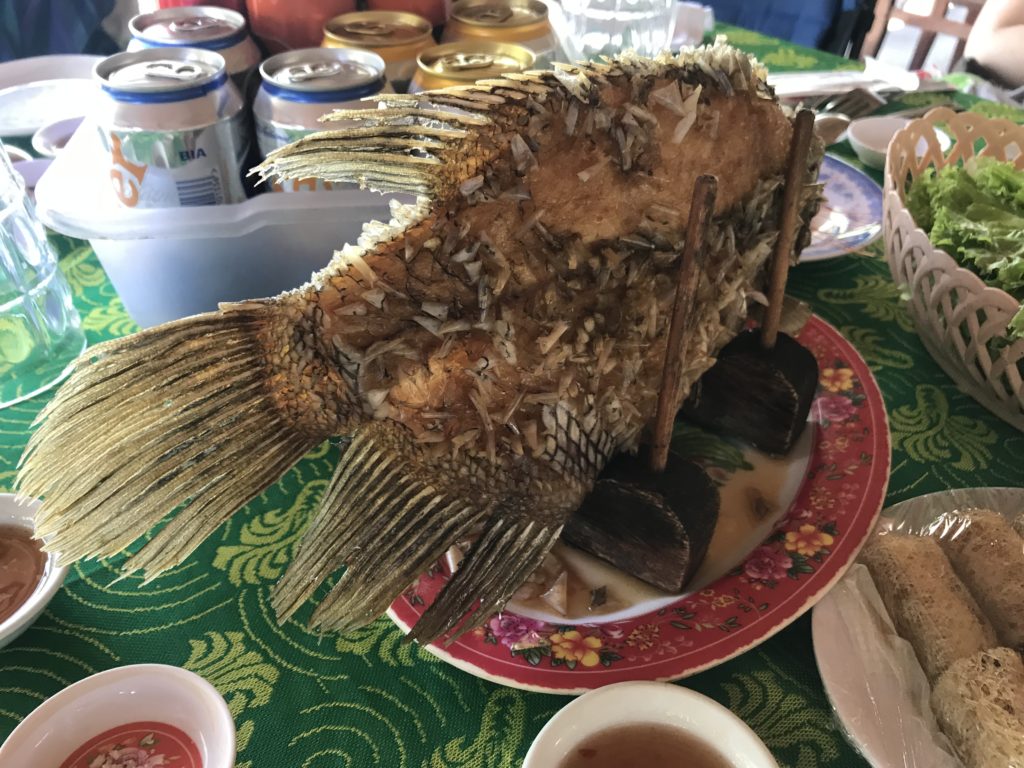 One of the staff then came over and made us some rolls with fish, rice paper, noodles and salad. I’ve eaten loads of Vietnamese summer rolls, but they always seem like this mystical food that comes into being away from my eyes. It was pretty cool to see them prepared and to realise that with the right herbs I could make them myself.

Once I started eating I realised how hungry I was. You forget about food in the Asian heat!

I commented to Karl that with our little bottemless pits to feed, there might not be enough food.

Then then brought out 6 more dishes.

Needless to say, there was definitely enough food.

Full and happy we returned to our hotel.