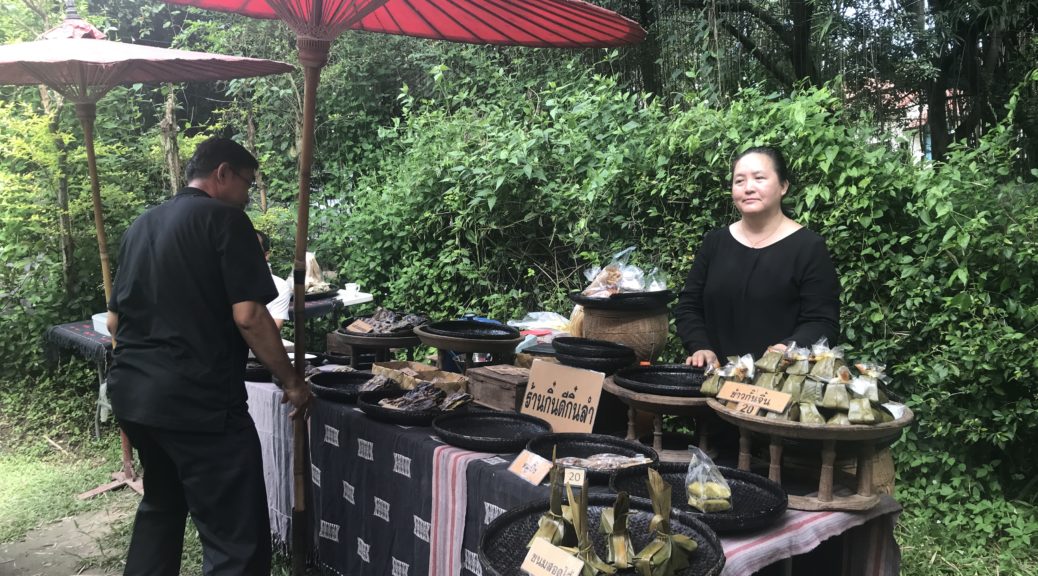 Today we visited one of Chiang Mai’s fantastic Saturday Markets – Nana Jungle Market. Nestled into trees on the edge of Chang Phueak, it’s a beautiful, secluded spot for a market.

As you drive up, you pass lakes, streams and rice paddies. The mountains of the Doi Suthep National Park can be seen in the distance. The market itself is nestled into a wood. There’s a great variety of interesting, high quality stalls there – clothes, bread, food, crafts, coffee.

We started off at the bakery, where they have big loaves of fresh bread for 55 baht apiece(£1.20/$1.70USD). There’s white bread, baguettes, wholemeal, seeded, rosemary bread, sourdough, walnut bread and more. While we were there they brought out a fresh batch of pastries (trays and trays of them!). The entire market seemed to descend on the stall at that point – you’d need to be on your toes to get the best ones!

This is one of the best places to buy bread and baked goods that we’ve found in Chiang Mai. Baked goods are a luxury out here – they’re often expensive and hard to find. Rimping (expensive Western supermarket) also sells bread, but it’ll cost you 65/70 baht for a small loaf.

We’ve taken to coming here every week and stocking up.

Then we went on to the Siamaya chocolate stall. Chocolate’s not very common in Thailand. The stall owner, Chris, told us that all the cocoa beans are locally sourced. He also said that they intentionally under roast them slightly to give a particular flavour. We certainly enjoyed it and bought all 6 flavours (it’s hard to find chocolate in Thailand – we needed to stock up). They’re relatively pricey, but then most chocolate is in Thailand. A small bar cost 60 baht/£1.35/$1.80USD, a large bar cost 160 baht/£3/$4.80USD.

After picking up a few other bits and pieces we discovered that the stall in the centre of the Nana Jungle market was giving out free coffee. Hurray!

We were about to head home when I spotted a bicycle operated blender. The stall owner had a crate of juicy looking limes to make his smoothies, and I couldn’t resist.

I was happily filming the process, waiting to watch him hop on the bike to blend up my smoothie when he beckoned to the crowd. Everyone shook their heads, but I figured that as it was my smoothie I ought to do the honours.

So, I hopped on and started cycling! The stall owner was egging me on to cycle faster. And I guess there was also in the incentive of the delicious iced drink at the end.

And, my goodness, was it delicious! Mrs Pa, eat your heart out – I think we have a new contender for ‘best smoothie in Chiang Mai’.

On the way out we picked up a couple of packs of banana leaves. We’ve seen these around – they’re quite commonplace in markets in Thailand. We’d never quite got round to trying them, so we thought we would. After a couple of bites I gave up. Karl finished them, but dubbed them ‘the spiciest thing I’ve eaten in Thailand’. And that’s saying something – Karl certainly loves his spice.

I have to say, spice aside, they’re not really for me. The fish are a bit boney and don’t have much flavour other than the spice. I think I’ll stick to the green curries in future.

We did also get dessert at that stall, though. Some sort of delicious orange cake, which more than made up for the mediocre fish dish.

There are plenty of places to sit and eat, including a little children’s area with mats on the ground.

The Nana Jungle market is open every Saturday from 7am – 10.30am. We arrived around 9.30 and there was still plenty of everything to buy. By about 10.15, though, some stalls were packing up so I wouldn’t recommend cutting it too fine.

All in all I though this market was excellent. It would be worth it for the beautiful drive alone, but the products are very high quality and there’s lots of variety of stalls. We’ll certainly be returning.