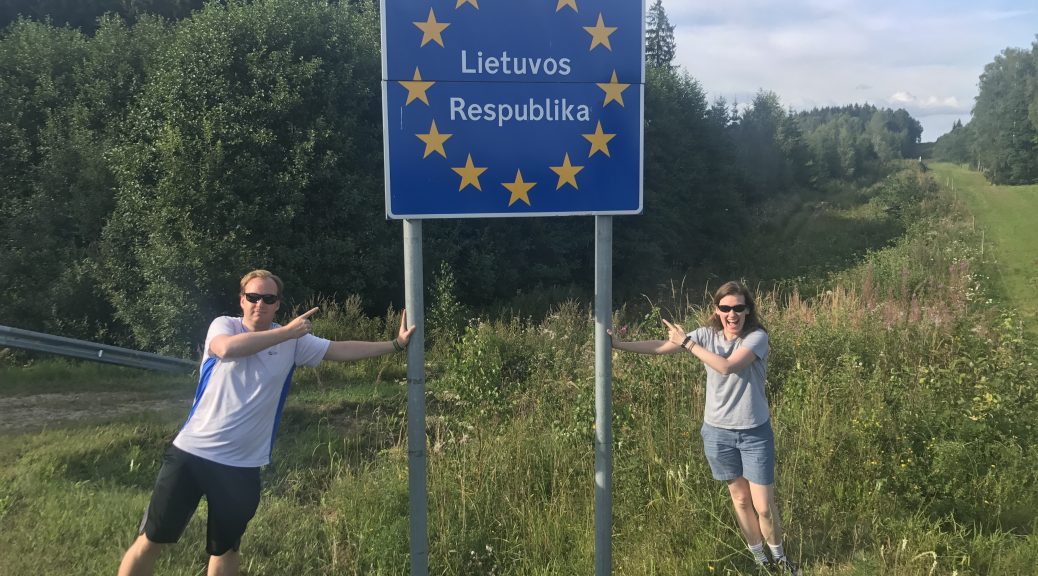 Today we drive to Pajevonys – the town where Karl’s family used to live.

In WWII many Lithuanians of German descent had to flee when the Russians invaded. In 1942 Karl’s family were forced to flee their homes, with promises that they would be reimbursed for their land and helped once they crossed the border. Karl’s Oma, Opa and their infant began what would end up being a 5 year long, extremely gruelling journey across Lithuania, Poland, Germany and finally to Canada. They eventually settled in Canada, having had another child (Karl’s father) on the road. They had no money and no possessions, but were alive and could begin a new life on the other side of the world.

Today, Lithuania has laws which allow the families of these refugees to regain their Lithuanian citizenship.

For these families, it can be a way to reclaim a piece of their heritage and bring themselves closer to anscestors who went through so much to allow them to live.

5 years ago, Karl started the process of applying for this citizenship. To be eligible he had to prove decent as well as his family’s flight from Lithuania during the time of the Russian invasion.

This meant recovering many family documents both from members of his family and from official bodies. Everything then had to be translated to Lithuanian. For documents written in Old German, this meant finding the few remaining people who could speak both old and modern German, translating the documents to modern German and then translating them to Lithuanian. Needless to say, collecting all the documents was quite a feat. In doing so, Karl discovered many details of his family that would otherwise have remained locked away in 80 year old documentation.

Once the application had been accepted, Karl decided to return to Lithuania to see the land that, if history had been different, would have been his home.

We flew to Brunswick in Germany and took transit to Saltzgitter. From there we began a walk/transit journey across Germany, Poland and into Lithuania. We ended the journey in Pajevonys – the town where his family once lived.

In Pajevonys we were struck by how amazing the people were. We went to the Jewish museum, about a 20 minute drive North of Pajevonys, to ask for help. The curator didn’t speak English, but drove with us to a local school to ask the English teacher for help. She joined us to drive to the major’s office. Once there the major was able to pull out some maps showing the area boundaries from the 1940s – we’d only been able to find more modern maps on the internet.

Since then, Karl has kept in contact with the major of Pajevonys, giving him information and photos to publish in a book about the history of the area. The major has sent Karl further documentation, showing the exact plots that used to be his families.

4 years later and we’ve returned to Lithuania along with Karl’s sister and her family, who have also been able to regain their Lithuanian citizenship as a result of Karl’s successful application.

We’re currently driving to Poland, from where we will cross into Lithuania on the same path that Karl took 4 years ago and their Grandparents took over 80 years ago.

We drove here as this was the point where our bus dropped us off on the walk, 4 years ago. From here it’s a couple of hours walk to Vištytis in Lithuania. The route is beautiful – you go past Lake Vištytis and many mature trees. There are campsites and walking trails. Unfortunately we didn’t have time for them on this trip, but would love to come back in the future. When we walked along this route it was September and the Autumn colours were out. Very lovely.

We drove through Vištytis, which is the last Lithuanian town from which Karl’s grandparents would have entered what was then East Prussia annexed by Germany.

It is now Russia. You can see the border between Lithuania and Russia, which is marked by a wall that goes to the edge of the lake.

Here we visited the church where Karl’s grandparents were married. It was still standing but no longer functional.

Final stop: The location of the ancestral home in Pajevonys, Lithuania

With the help of the maps sent by the major of Pajevonys, we were able to find the location of the family plot. We drove down a gravel path, and then onto an overgrown dirt path. Eventually we came to the South West corner of the historic plot. By now it has been divided up into several plots and you can see the new boundary markers, but the original plot was still discernible, bounded by the roads.

It may not look like much, for Karl it seemed like the end to a several year long journey. I’m so proud of him – it’s taken years of research and several trips to Lithuania and Germany, but he’s finally managed to find the location of his ancestral home. Hurray!