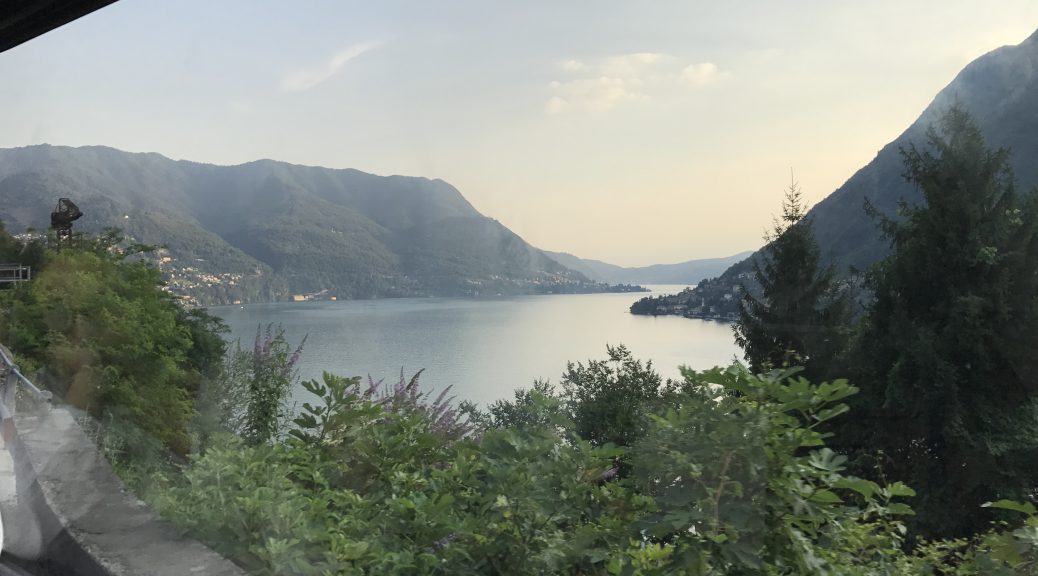 After we touched down in Milan, we were quickly through passport control and out.

We were travelling to Bellagio that day, so went straight to the train station (which you can access from either terminal).

After two uneventful train rides, from Milan to Saronno and Saronno to Como, we went to find bus C30 to take us to Bellagio.

This is where things got interesting.

We walked all around the area trying to find the bus. It wasn’t listed at any of the stops on the bus station itself, nor was it listed at the bus stop to the left of the train station exit. Eventually we found it just behind the bus stop, but it was packed and just about to depart. We folded the stroller and squeezed on (literally – I was standing on the steps).

I didn’t get offered a seat (understandably – they were in short supply) but I did get several people, including the driver (!) holding their hands out to me to take my baby on their knee. I figured why not and passed him off to a nice looking older lady.

The drivers do this all the time though, right, and are used to it? Well…

We were settled into our trip, gazing out the window when we heard and felt a bang. Immediately we saw about three rows of people jump up into the aisle (luckily the bus had emptied out a bit by now). We’d apparently hit a wall.

One entire window was shattered and there was glass covering the seats. We kept on though. I guess what else can you do?

I think we were expecting a beautiful, relaxing bus ride. It was certainly beautiful, but relaxing? Not really.

Our lovely ride was punctuated by the driver’s horn ever minute or so which wouldn’t have been out of place at a novelty horn convention. Generally this happened when we went round corners, so was accompanied by sound of shattering as more glass tumbled into the bus.

Apparently people also don’t look where they’re about to sit on buses. At least a couple of times there were yells and people lunging forward to grab those who had just got on and were about to sit in a seat full of glass. All in all a journey I won’t forget!