I’ve been in Thailand for nearly 6 months now, and am starting to feel very comfortable here. However, the feeling of being very far from home never quite goes away. Sometimes it’s distant, other times it hits me without notice.

Coming back from Vietnam and finding a 2m long snake in our garden was one of those times.

Karl was out of the house and the kids were asleep, so I was alone. I saw a cat coming into our garden and went to shoo it away. It wasn’t budging and seemed focussed on something in the bushes. When I saw a massive coil I stood up in shock. It took a moment to register that, yes, there was a big snake in my front garden. This is Thailand, after all, and snakes are much more common here. 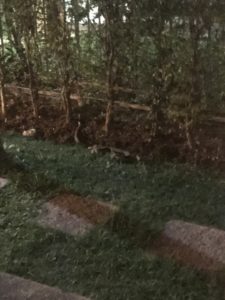 The image above isn’t great, but it gives you a sense for how much I could see. See if you can spot the snake!

Now, I love snakes. I’ll happily hold them when the opportunity arises, but I don’t know much about them. I couldn’t see the head well, and had no idea if it would lunge at me. So I stayed well back.

I went back inside to do some research and watch from safety. I was surprised that it was still there. There was the cat, who had been stalking round it the whole time. I’d also turned on the lights and made a bunch of noise as I came outside. I thought snakes fled in those kind of conditions, but this one was still.

Copperhead racer – one of the most common snakes in Thailand

I could see distinctive black lines along it’s back, so went back inside to do a bit of research. I found this very helpful article on common snakes in Thailand. The only one that seemed to match up was the Copperhead Racer.

The Copperhead Racer is one of the most common snakes in Thailand. It is also one of the largest, but thankfully doesn’t have venom injecting fangs, so cannot seriously harm adults. However it is aggressive, does have venom in it’s saliva and will cause redness and swelling if it bites you. A common behaviour is to ‘play dead’ when threatened. Well, that explained why it didn’t slither away even with a cat attacking it.

I watched from inside for a while. At one point the snake did lunge for the cat, which jumped back. It was almost too fast to see!

Lost in the dark

Eventually the Copperhead slithered away into nextdoor’s garden. I was a bit uneasy about it being out and about, but figured there wasn’t much I could do, so closed the curtains and went to bed.

I was out helping Jack, my three year old, ride his new bike, when I spotted the same cat as the night before. Again, it was stalking around. When I went to look, sure enough, there was our friend curled around a neighbours hedge. Now that it was daytime, I could get a much better view of him. He really was a beautiful snake (although I still didn’t want him near my kids!). He was a lovely soft brown colour, with strong black lines down his back. He also had distinctive black lines spiderwebbing away from his eye – definitely a Copperhead Racer.

Now it was daytime it seemed more sensible, so we asked our Thai neighbours if there was a number we should call. Suddenly they looked behind us with exclamations and pointed at the road. Apparently the Copperhead had had enough of the cat and was making a break for it. This is the first time I’d seen him stretched out – I was glad I hadn’t gone closer the night before. He was around the size of me.

Calling in the professionals

Everyone was a bit excited at the giant snake. I was worried we’d lose him again, so went to tell the security guard. I wasn’t sure what would come of it, but he was great. He called someone, who came within minutes to our road.

By this point the snake had gone into another garden an hidden in a pile of rocks. He was stationary again and everyone was keeping a close eye on him.

The security guy looked at the snake, then went to call someone else. Within 10 minutes or so, two guys had showed up on their motorbikes. At this point most of the street was out to see what would happen.

The first guy took a broom from the house and pinned the snake to the floor. Then the second came and calmly picked the snake up by the head. He brought it out to show us, coiled it up in his had and took it away on his bike. And that was that! We don’t know whether these guys were trained, or just used to removing snakes, but either way it was quite impressive.

Video of the finale at the top of this post!