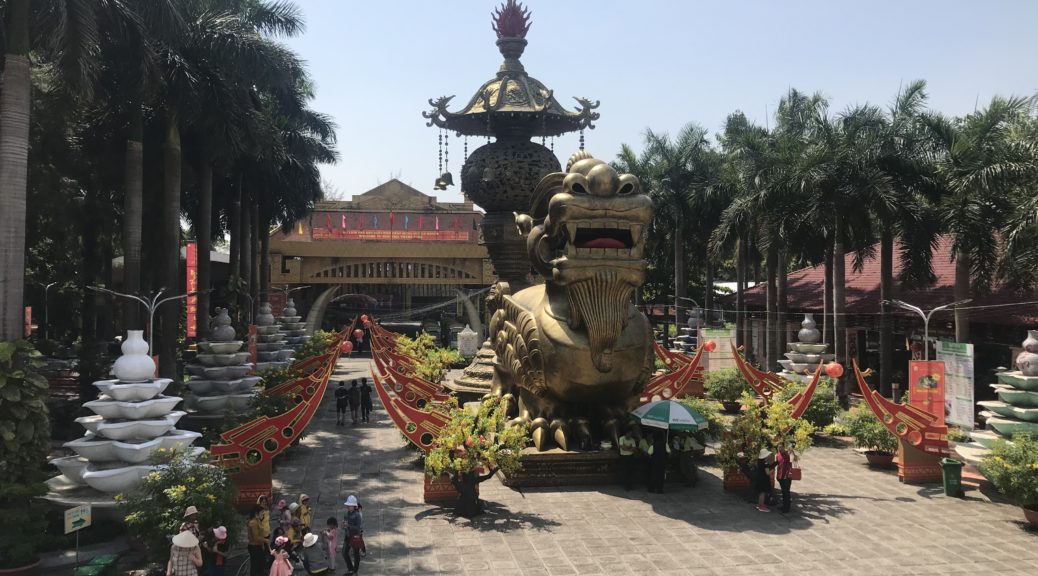 Suoi Tien gets mixed reviews on Trip Advisor – some love it and others say it’s old and uninteresting. In the end our curiosity won out.

As soon as you arrive you’re met with dragons, Buddha, huge frogs with lucky coins in their mouths, tusks (models), lotus flowers and more. You’re immersed in Eastern design and artwork. 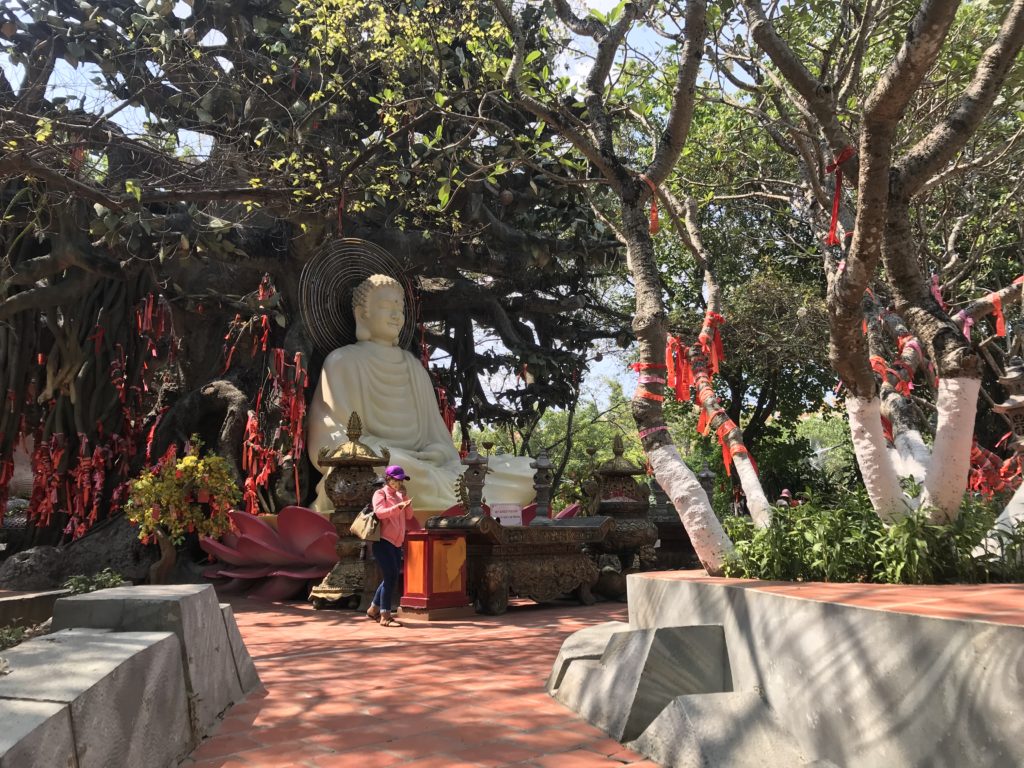 Walkways are themed, there are abundant fountains everywhere, temple style huts to rest in, ornate trees…There’s even a functional temple.

The entrance fee was so cheap (something like $5 a ticket, with kids under 1m going free). Totally worth it just to walk around and soak in everything. 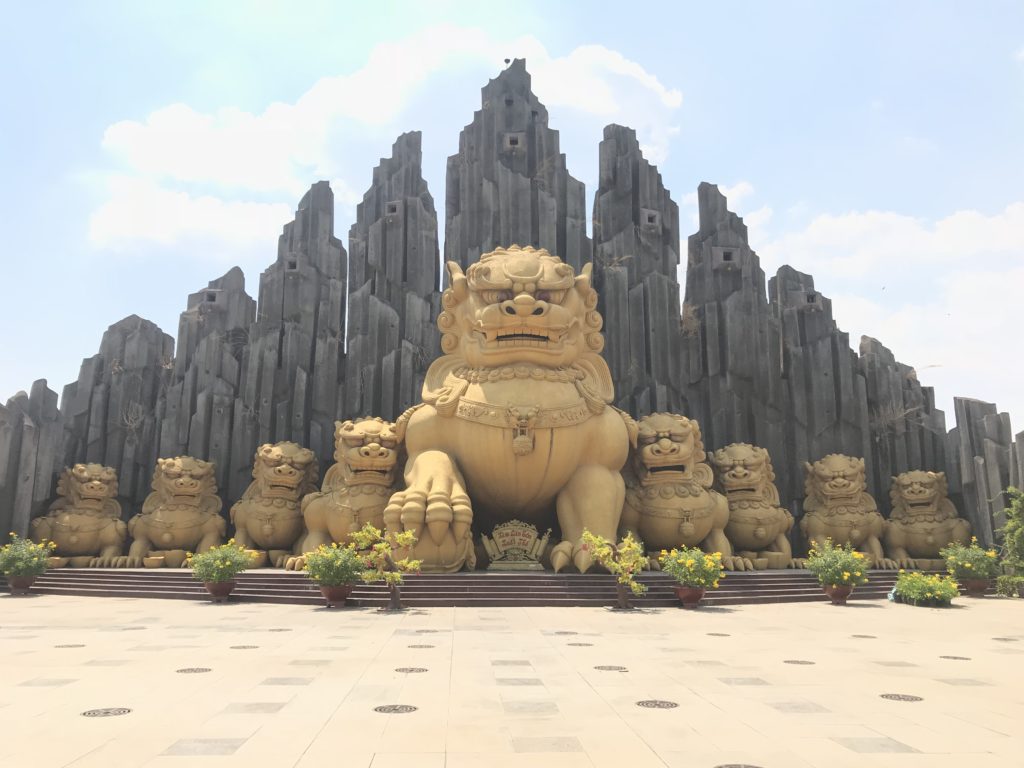 The amount of shade is great – trees, walkways and covered areas. I always burn in Theme Parks in England and it’s really hot in Saigon. We still needed sun cream, but I wasn’t constantly worrying about my kids getting burned.

The enchantingly named ‘Kingdom of Future Geniuses’ was an absolute paradise for small kids. I was a little disappointed to find out that ‘Geniuses’ is actually the correct plural form of ‘Genius’. Hoping for a bit of translational irony there, but no such luck.

Anyway, I digress. Take all the kids’ play structures you’ve ever seen and put them in one big room – that’s the indoor playground at Suoi Tien’s Kingdom of Future Geniuses. Jack nearly lost his mind when he saw it. I don’t think I’ve ever seen such sheer disappointment in his face, as when we told him to wait 20 seconds for us to buy a ticket before going in. 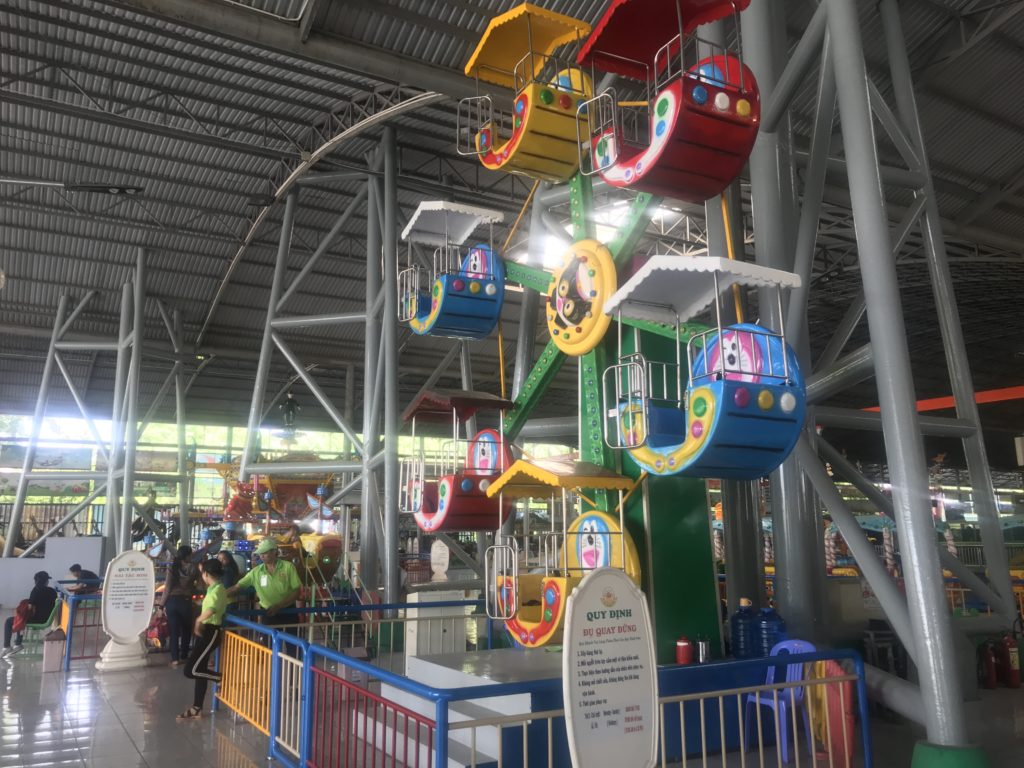 The other completely awesome thing about the Kingdom of Future Geniuses was the kids’ fairground rides. They had child versions of all the most popular adult rides – a carousel, swinging chairs, a small rollercoaster, kid dodgems, a swinging boat, a ‘flying’ carousel, a Ferris wheel. There were also loads of those small coin operated ones. 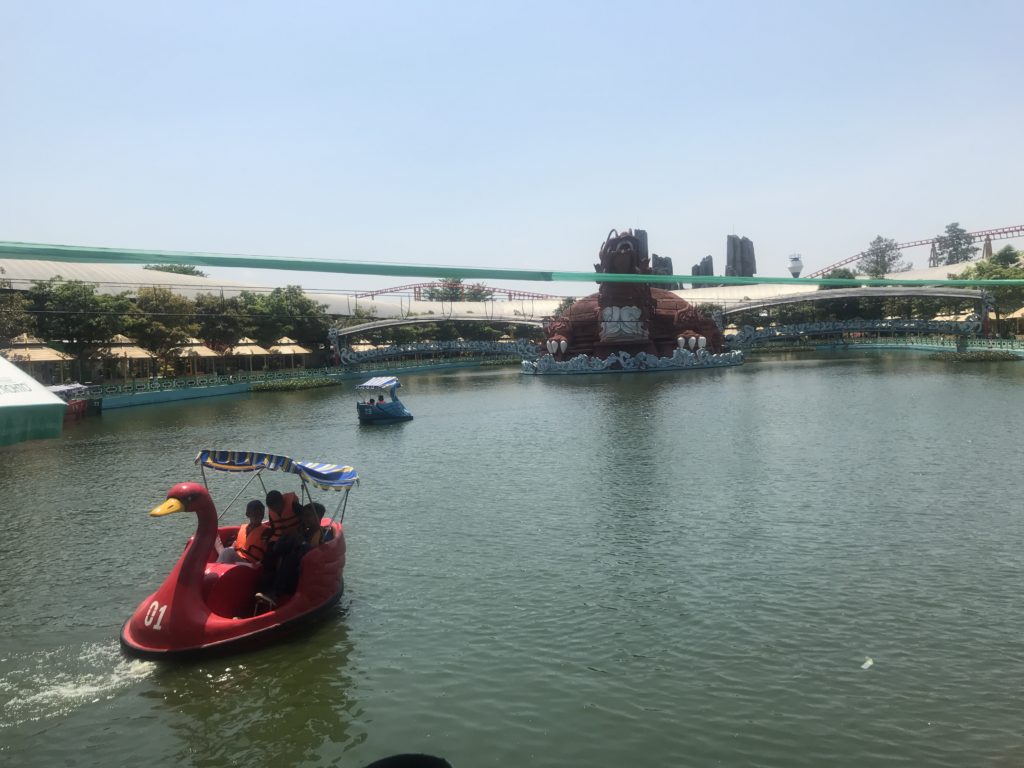 Ok, so it wasn’t actually called that, but you can ride swan boats on a huge lake 😉 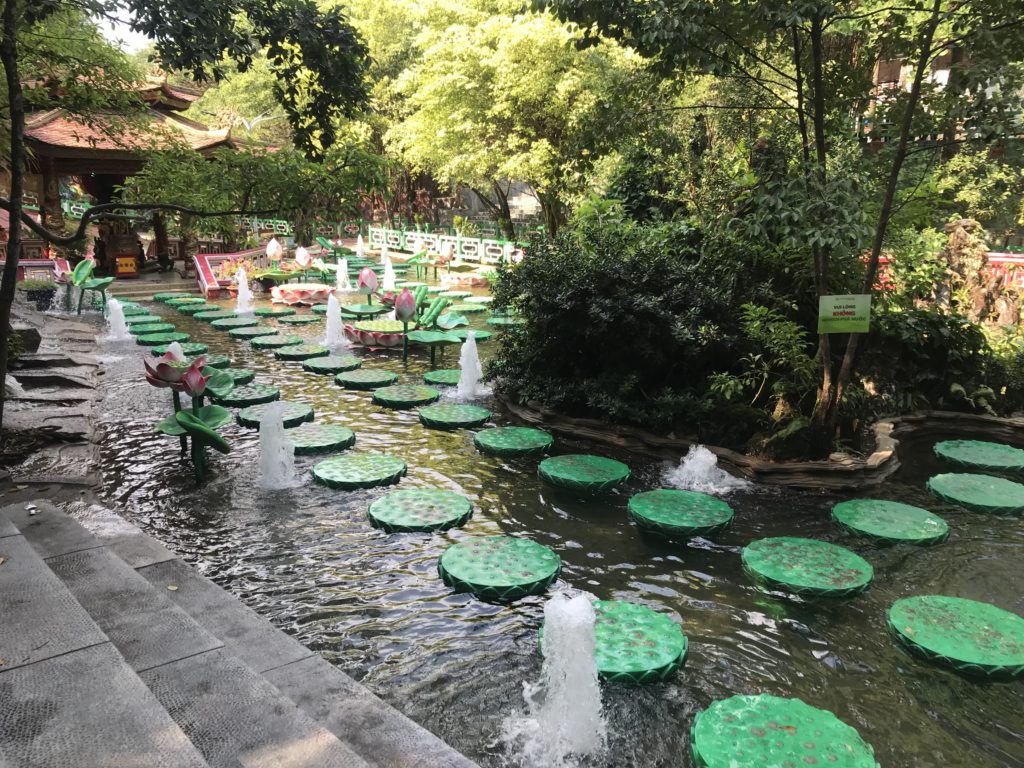 Here’s an example of one of the enchanting, beautiful parts of the park: A pond with lily pad stepping stones, leading to a temple like structure in the middle.

Fountains that you could reach out and touch were spread around. And there were lotus flower sculptures too, bringing the whole thing together.

We both found ourselves helping Jack across without thinking about it – holding on to him when he wanted to touch the fountains, helping him step across without slipping. In some ways it’s sad that you’d never find this in a Western theme park. A pond with stepping stones that you could easily slip on. Water that’s definitely deep enough to drown in. It certainly wouldn’t have passed any Health and Safety inspections!

I’m really glad we got to experience it, though. Jack loves lily pads anyway, but being able to walk across them like stepping stones AND touch a fountain! It was magical.

The famous rides (or at least the ones we knew about) were the Harry Potter haunted house and the depiction of Buddhist hell attraction. After we did those we tried a safari themed boat ride, which you entered through an elephant’s mouth. Finally, we couldn’t resist the Phoenix fairy palace as we wanted something a bit lighter and the Phoenix statue at the front was awesome. 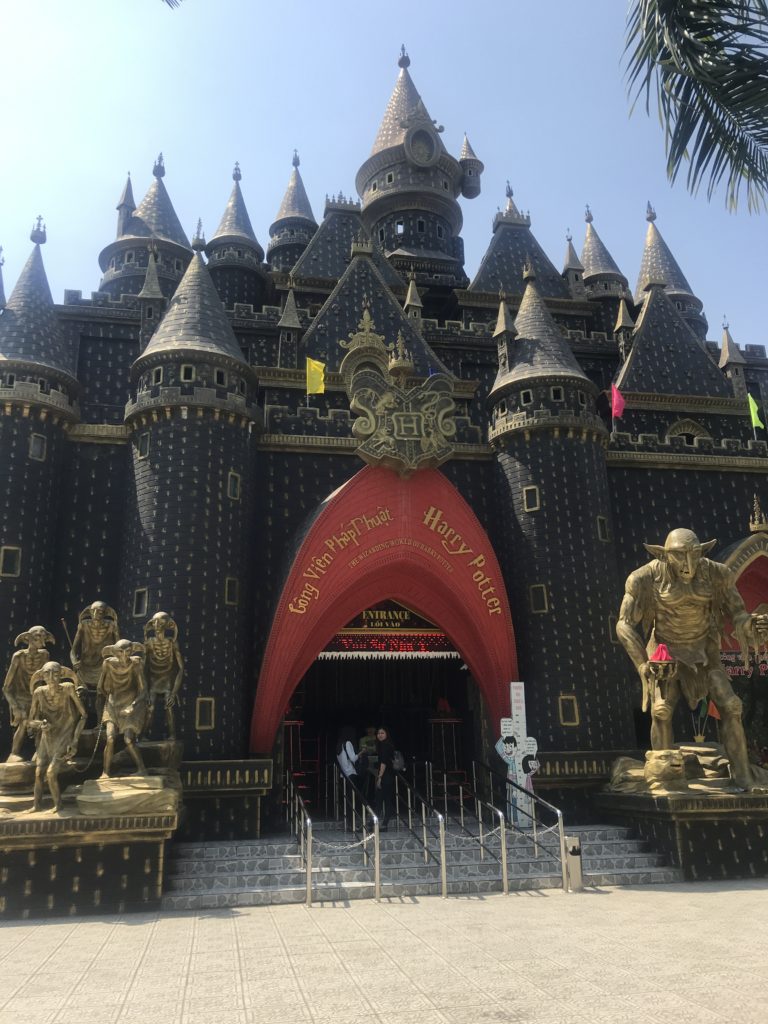 This was the first attraction we did, and it was kind of hilarious. You walked through it, visiting one room for each book. The whole thing was in the dark, with Deathly Hallows symbols lighting your way on the ground. Every so often things jumped out at you. I’m sure it was unlicensed (much like the Disney music that was playing throughout the park).

When I walked in (alone – Karl stayed with the kids), there were two other couples. The last woman in line took my hand and we all walked through together. I do like Vietnamese people. 🙂

As it was in the dark, they hadn’t painted any of the statues – everything was grey, with eyes that lit up and sometimes black or white fabric for the cloaks. Then they used green and red, basically disco lighting throughout. It was very weird and certainly not up to the standards of Harry Potter world in the UK. It was also all very samey – you’d see a grey model of Aragog, with red eyes. Then you’d see a grey model of Harry Potter…facing someone with red eyes. Then you’d see someone threatening in a cloak with, you guessed it, red eyes. Everything had quite nicely done plaques telling you what it was. Which was useful as they hadn’t done a good enough job of actually making it look like the thing it was supposed to. 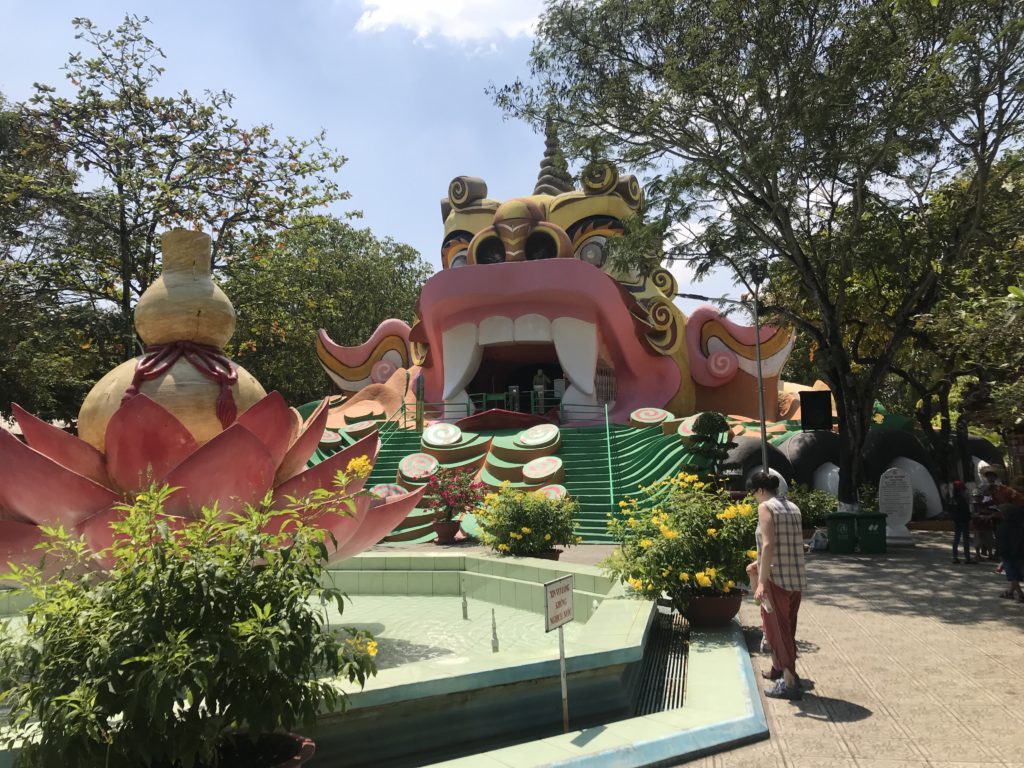 The entrance was really impressive. You walk through the dragon’s mouth, over its tongue to go in. Then you go down a long staircase to the attraction below.

Once you get there, it’s pretty gruesome. There are a series of cages, showing various torments. As with the Harry Potter haunted house, things jump out at you. The glowing eyes and lighting effects from Harry Potter were there, but they made more sense here.

It certainly wasn’t an aesthetic view of hell, like you’d see in some Renaissance art. Actually it was unashamedly grotesque and horrible. Hellish, I suppose.

With a newer theme park, they’d make the detail more impressive and everything would look newer. But actually, for an exhibit about hell, feeling that it was old and falling apart a bit made sense. 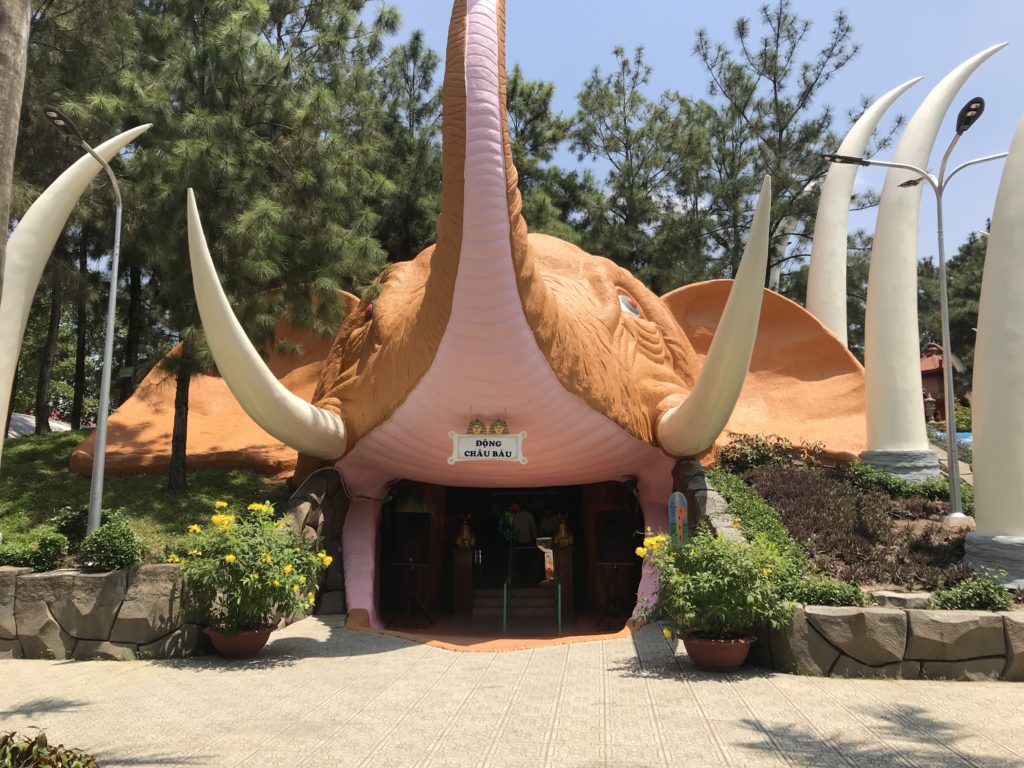 We wanted to do this one as the lady selling tickets said that Jack could go in. It looked great from the outside – you walk into a giant elephant’s open mouth. I thought a boat tried would be fun for him too.

As soon as the ride began, though, I realised my mistake. Once you’re on the boat the shiny artwork disappears. Cue grey statues, dark lighting, red eyes, eerie sound effects and things jumping out at you. Sigh.

Luckily, with some fast thinking I told him we were in the Foggy Foggy Forest (his favourite book). I pointed out all the bats, spiders and threatening looking creatures in an excited voice.

He went with it. Thank goodness. I even managed to smooth over my shocked screach, when a sheet attached to a rope swept over unexpectedly and hit me in the face :-/ 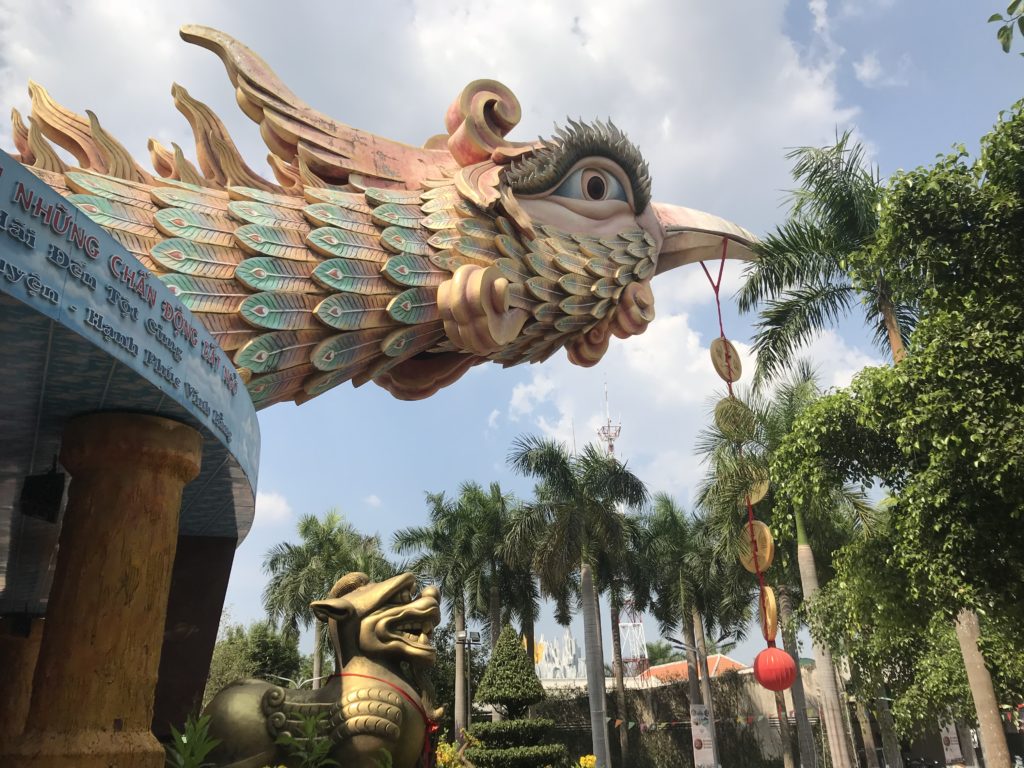 We hadn’t done an attraction together yet, so we decided this would be a nice, light, friendly one.

It was another boat ride beginning with a pleasant frieze of clouds against a blue sky. We all hopped in and set off.

Round the corner, we were met with a lovely sight of…a dark room containing a grey volcano with ominous red lighting.

The ride continued, basically a carbon copy of the previous three attractions. This time, though, we had two small children to keep calm in dark eerie scenery with things jumping out at us.

It ended with the boat going through the legs of a 20 foot high gorilla that fell down at your head, red eyes blazing.

Amazingly enough, Cade (1) was completely indifferent to the whole thing and Jack loved it. There’s an ‘Ogre doing Yoga’ in his Foggy Foggy forest book. We told him the gorilla was the Ogre. It was like he’d met Winnie the Pooh. He was talking about it all afternoon.

After that, I was done. There was a roller coaster, but neither of us trusted Vietnamese health and safety enough to try it. Karl tried to persuade me to try out the Snow Castle attraction. I didn’t especially feel like meeting a grey Dopey with red eyes, though, so I vetoed any more rides. 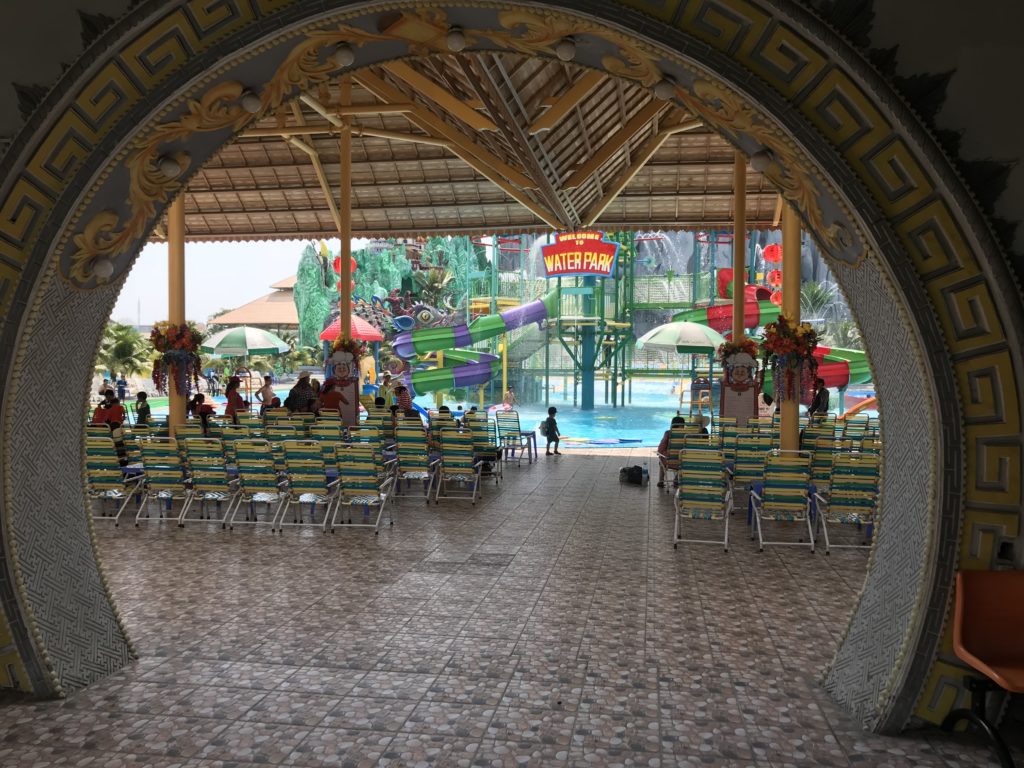 There is a waterpark at Suoi Tien, for an additional 100,000 Dong entrance fee. There didn’t look to be much shade, so we passed. It did look huge and fun, though, with lots of slides etc.

The rides are old and lacking variety. But that’s pretty much the only negative. Everything apart from the rides is interesting, beautiful and well designed. There’s so much to look at, it’s totally worth the entrance fee. I suppose if you go to Theme Parks for the rides you would be disappointed. But there’s so much else there to enjoy.

The food is plentiful and cheap (around £1/$1.30 for a vegetarian dish or about £1.60/$2.20 for meat). It’s all Vietnamese, but honestly, I wouldn’t give people the time of day if they criticise it for not serving chips and pizza!

I also really like that you pay a small entrance fee and then extra for the rides. It means that we didn’t need to feel like we were ‘getting our money’s worth’ – we got that in the first 5 minutes! We also didn’t pay huge entrance fees for large rides we wouldn’t be able to do with small kids anyway.

It was a great day for all of us. Karl and I loved seeing the themed…well, everything. And Jack had a whale of a time. Well, I suppose given the context I should really say ‘dragon of a time’.