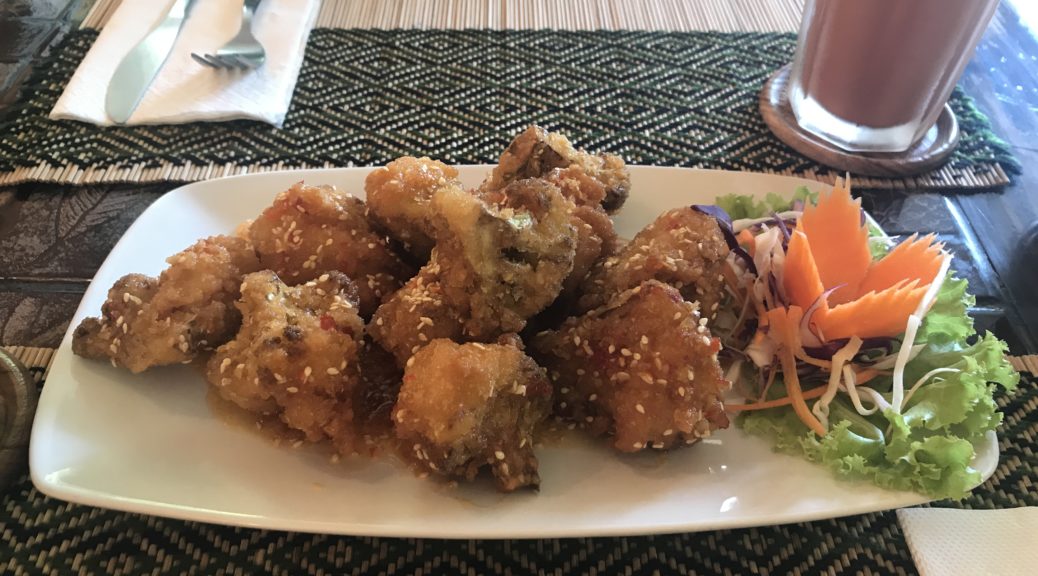 Yesterday we went into Chiang Mai old town and happened across ‘Vegan Heaven’. Although we’re not Vegan, we do like the food, so thought we’d try it.

The restaraunt was nice, although it was definitely aimed at proper vegans, not wannabes like us. It had lots of quotes from famous vegans on the walls. I’m sure they would have been very inspiring for actual vegans, but they just served to make us feel guilty about all the meat, fish and dairy we’d eaten in the previous week!

The food was great, though. We started with smoothies. I had a green juice, which really was made of veggies (not just 90% apple juice with some kale thrown in to turn it green). Karl had a fruit juice, which was pretty yummy.

We started with vegan ‘chicken wings’ (deep fried cauliflower). I never was a big chicken wing fan, but these things were really good! Most dishes were between about 80 – 120 baht.

We followed up with a bean burger for me and a hot dog for Karl, both served with sweet potato wedged. Yum.

Afterwards we went on to the Blue Diamond Cafe. We didn’t know about this one before, but it turns out that it’s also a great place for healthy food. There’s lots of vegan and organic options, as well as a huge menu of herbal teas.

The setting is lovely too. There’s a Koi pond running through the centre, with different areas to sit in. Some areas have chairs, and others have cushions on the ground. There are trees and foliage throughout the cafe, and a canopy above. The whole thing feels cozy and natural at the same time. We were rather sad that we’d already eaten – we’ll certainly return next time we’re in Chiang Mai old town.