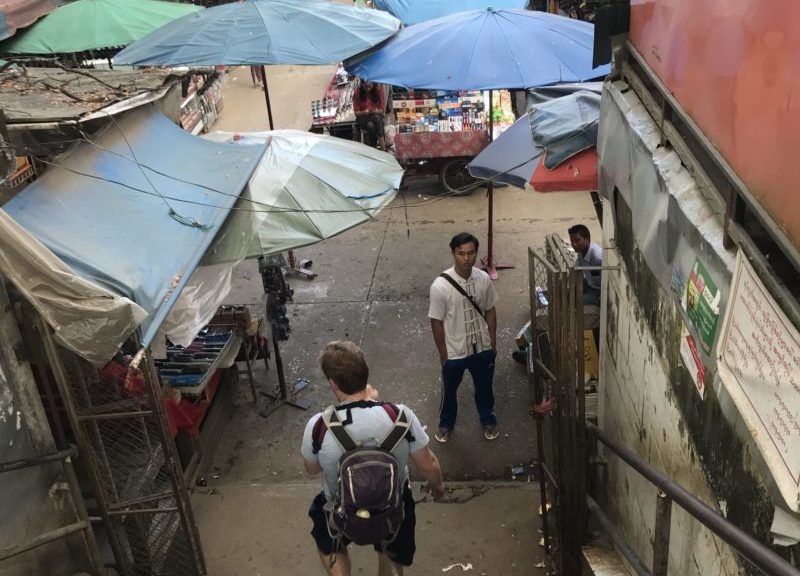 Last weekend we did our first ‘visa run’ to Myanmar. We’re on a 6 month, multi-entry visitor visa to Thailand. When entering Thailand on this visa you get a stamp with leave to remain in Thailand for 60 days. We had the option to pay 1900 baht (£44/$58USD) at immigration for a 30 day extension. However with 4 of us it would get pretty expensive. You have to pay every cost (visas, visa extensions etc) per passport, meaning that our 11 month old would also cost us 1900 baht.

Given how cheap hotels in Northern Thailand are, we figured we could do a whole trip for the same cost as the 30 day extension. So we opted to do a trip to Chiang Rai. Chiang Rai is about an hour’s drive from Mae Sai, where we could cross over to Myanmar for another 60 day stamp.

The drive to Mae Sai, where you can cross to Tachileik, Myanmar, is around 4 hours from Chiang Mai. It’s absolutely beautiful – lush green hills, farms and trees, with the occasional drive through a small town. I would do this trip just for the drive. At one point we passed a farm, which had stalls selling small green fruit at several places along the road. We stopped at one, and tried a sample from the smiling vendor. They turned out to be absolutely delicious mini pears. 50 baht for a large bag (just over £1/$1.50).

We didn’t get very far before the kids really started protesting, so we made an unscheduled lunch stop at the Dr. Lee farm stay.

This turned out to be a pretty good stop to do with kids. They have a coffee shop, good toilets, old trains and a farm. The farm was small, but had horses, pigs, chickens, alpaca and geese.

After a quick trip to the farm we were back on our way.

Driving and parking at Mae Sai

Eventually we got to Mae Sai, which is the town bordering Myanmar. It’s also where the Northernmost point of Thailand is found.

The area around immigration is packed with cars and people. There wasn’t a parking space in sight, so we did a U-turn in front of immigration to look down some of the side streets. There was a guy holding a sign for car parking for 50 baht in front of the first left hand turn, so we asked him. He signalled his buddy, on a bike to lead us to the car park.

It quickly became apparent from the swaying that dude on a bike was rather drunk. I was a little wistful when I saw all the large, official looking car parks we passed as we followed him. However, we’d got their hopes up for our 50 baht, so we continued to follow them.

The car park was distinctly small and sketchy. Drunk bike dude was a little creepy (to be fair, he just wanted to interact with my kids, which is pretty normal in Thailand. People are just not usually several pints in at the time!).

Our car was fine, though, so it was all good. Phew.

We walked through a market on the Mae Sai side to get to immigration. Most of the merchandise was things you’d expect from a Thai market – stone carvings, beaded crafts, bags, wooden carvings etc. It was well presented, though, so would be a pleasant place to shop if you didn’t have 2 small boys!

The immigration officers are obviously used to Farang (white foreigners) doing border crossings. They immediately pointed us to the correct line. I think this immigration point is mainly for foreigners and preventing human trafficking.  As we were waiting there were loads of locals walking through. Occasionally the officials waved them through, most of the time they didn’t even look up.

Once through Thai immigration we were ushered into a tiny room with green walls, 3 desks and plastic chairs. There was a Myanmar official at each desk.

I will admit to being a bit nervous when this happened. It didn’t feel particularly official! The officer was friendly, though, so I calmed a bit. He asked if we were crossing back to Thailand the same day, to which we said yes. Then he asked if we were going to visit the markets in Myanmar, to which we also answered yes.

It costs foreigners 500 baht per passport for the crossing (fair enough, really, as we’re all doing it to stay in Thailand longer). We’re not allowed to stay in Myanmar without a visa (Myanmar tourist visas are pretty expensive so we didn’t get one for this trip). However, they do let you visit the markets as long as you leave your passports with immigration.

He stamped our passports into Myanmar, and then back out again. We paid 2000 baht for the 4 passports (£46/$61). He then gave us a green receipt, which we would need to collect our passports on the way back to Thailand.

The bridge between Thailand and Myanmar

We then walked across the bridge between Thailand and Myanmar. It was Karl’s 4th time crossing a country border on foot, my 3rd. It’s a pretty cool feeling, really. Somehow it makes you feel closer to your travels than just taking off in an airplane and arriving in a new country. It’s also a weird feeling being in ‘no man’s land’ between 2 countries!

We walked down into the markets in Tachileik. To be honest, they were a little disappointing. Most of the merchandise was the same as the markets in Thailand. We were hoping for some Burmese food or something distinctive, but it didn’t really materialise.

They did sell roasted chestnuts, which is apparently a food that you can only get on the border between Thailand and Myanmar. Given that roasted chestnuts are about the most revolting thing you can put in your mouth, though, we decided to pass.

We walked around the town a little bit, but there wasn’t much to see or do. We did spend 40 baht on a coconut, though, (Thai baht is an unofficial second currency in Myanmar) so at least we can say we bought something in Myanmar.

Going back to Thailand

We headed back to immigration. It was pretty obvious where to collect our passports. There’s a window with a big sign saying ‘passports’ on it.

Thai immigration was tedious as usual. Unlike Bangkok immigration, it wasn’t air conditioned, though, so that part of the trip was challenging with the kids. Thai entry cards require you to fill out all your details twice – once for entry and once for your departure. That means 8 separate forms once you add a husband and 2 kids. Attempting to fill them out in the hot, unventilated area of Thai immigration, whilst keeping two small children happy was no small feat. I came over to Karl after what seemed like hours and he announced ‘one down’. I nearly cried. Turned out he’d messed up one form right at the end, so had to redo it. Easily done, but was not what I wanted to hear!

Eventually we completed all the documents, though. We went through immigration, got new Thai entry stamps, with leave to remain for 60 days (hurray!) and were on our way.

It was about an hours drive back to Chiang Rai, the night market and our hotel.